PEBBLE BEACH, Calif. (AP) — The leaderboard next to the 18th green at the U.S. Open again was filled with red numbers under par.

The only difference was the scenery.

This was Pebble Beach, set along the rugged California coast. Gary Woodland finished at 271 for a three-shot victory over Brooks Koepka. They were among 11 players who broke 280, for so many years the scoring standard of a strong test at the U.S. Open.

It might as well have been Erin Hills, built on pure Wisconsin pastureland, where two years ago Koepka shot 272 for a four-shot victory in a U.S. Open littered with red numbers — eight players broke 280 — and complaints that the toughest test in golf had lost its identity.

In fact, they shared one identity: Neither had any wind.

It’s rare for Pebble Beach to have virtually no wind over four days of any tournament, much less a U.S. Open. Only two players in the previous five U.S. Opens at Pebble Beach shot lower than 284 — Tiger Woods (272) with his 15-shot victory in 2000, the year no one else broke par; and Tom Watson (282) when he finished birdie-birdie for a two-shot victory over Jack Nicklaus in 1982.

There were 31 players who were at 283 or better at this U.S. Open, including amateur Viktor Hovland and Nate Lashley, a 36-year-old making his U.S. Open debut.

The overwhelming verdict was the USGA got this U.S. Open right, perhaps because everyone was expecting something to go wrong.

Phil Mickelson even tipped his cap.

Remember, it was Mickelson who said, “One hundred percent of the time, they have messed it up if it doesn’t rain.” He tried to sidestep compliments on Thursday (“It seems like they did a heck of job”) until he was practically gushing on Sunday, even after he extended his record to 0-28 in the one major he has never won.

On that it’s difficult to argue.

The rough was so lush and gnarly that it took brute strength to get shots to stop on the green. The putting surfaces became increasingly faster as the week went on, even though they never had that sheen from the sun, because it was hiding behind a thick marine layer all week.

This U.S. Open at Pebble had no shadows.

The fairways were about as narrow as in 2010, when Graeme McDowell won at even par. In some cases, they were narrower.

The lowest U.S. Open round at Pebble Beach was the 65 by Woods in the first round of his historic rout.

They played on until they got the right winner. Woodland might not have the pedigree of other U.S. Open champions at Pebble Beach, but he delivered the kind of shots that will take their place in Pebble Beach lore. He tied a U.S. Open record with only four bogeys in 72 holes.

Koepka might have earned as much respect for his runner-up finish as his previous two U.S. Open titles.

There were no gimmicks, just good golf.

John Bodenhamer, the senior managing director of championships at the USGA, was in charge of setting up the course this year. The USGA says that was the plan all along, for Mike Davis to devote more duties to his role as CEO and turn over the golf course to others. Hardly anyone believed that. It had the look of a knee-jerk reaction from another debacle at Shinnecock Hills the previous year.

Bodenhamer was asked which was more plausible: that a change in duties had been in the works before Shinnecock, or that the USGA doesn’t care about par? He laughed, and then came across as more credible than the USGA’s standard denial about trying to protect par.

“We do pay attention to score,” Bodenhamer said before the U.S. Open. “We want it to be challenging and tough, true to what the architect intended, a fair test that players feel good about it.”

The scoring suggests the USGA is going soft. What’s happening is the players are getting better.

In the first 56 U.S. Opens played over 72 holes, only once was the winning score 280 or better — Ben Hogan shot 276 to win at Riviera in 1948, and it took nearly 20 years before Jack Nicklaus broke the record at Baltusrol.

Matt Kuchar summed it best two years ago when talking about lower scoring.

“It is what we should expect,” Kuchar said. “Guys in any sport … have figured out how to get better with all the extra work and study and whatever else. We see it everywhere, whether it’s the track or the pool. We continue to see better numbers posted.”

Why should golf be any different?

The U.S. Open returns to Winged Foot next year for the first time since 2006, when Geoff Ogilvy won at 285 (5 over) and the U.S. Open set an unofficial, modern record of highest score to par with the fewest complaints.

That’s what the USGA seems to have figured out.

And that’s why the USGA, subjected to so much criticism in recent years, should feel as good as the guy to whom it gave the trophy. 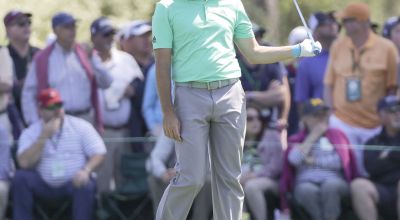