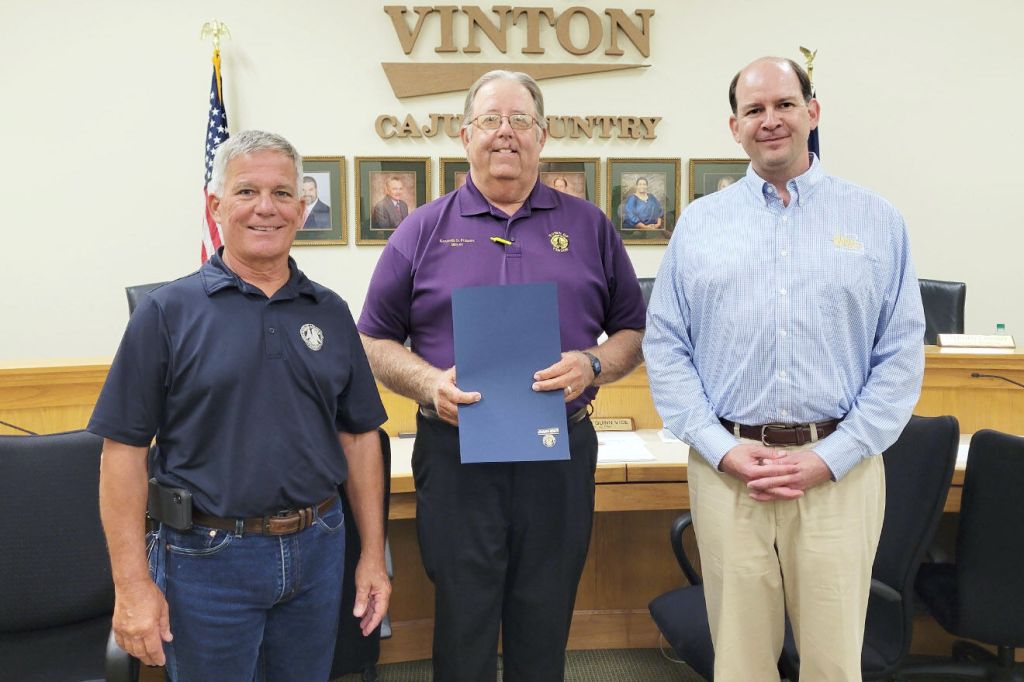 The event marks the changing of the guard that will take place from June 30 to July 1 when newly elected Mayor Marcus Renfrow officially takes the helm. Scott Spell will step up as Police Chief when Fox retires.

Fox strapped on his first gun in 1971, according to a resolution read in his honor by Senator Mike Reese. After time in college that included playing football, Fox enjoyed an illustrious military career as a marine appointed to The President’s helicopter squadron. He received the highest scholastic average at non-commissioned officer school and was meritoriously promoted to sergeant. Fox worked as a La. State Trooper for 25 years before becoming Vinton’s Police Chief in 2005.

Debbie McElhannon, president of the Vinton Mayor’s Armed Service Committee presented plaques to outgoing staff and officials, including Chryel Douga, the town’s payroll clerk who served from 1999-2020 and retired about a year ago.

State representative Les Farnum and Senator Mike Reese also recognized City Clerk Mary Vice who has served the town for 33 years. Justin Sittig has been training to move into that spot, and will do so officially the last week of June.

Farnum described Mayor Stinson as “Kenny on the spot,” because “he was there whenever I needed him when I served on the Calcasieu Parish Police Jury,” Farnum said.

Stinson grew up in Vinton and was always involved with town council. He served on the council from 1989 to 1997 and again from 2001 to 2006. He ran for mayor in 2007, was elected and has been the Mayor of Vinton since that election.

Reese said he has observed how Stinson conducted business, how he never steps out to take credit for the town’s accomplishments and instead acts as a cheerleader and giving credit to others.

Farnum gave Patin kudos for raising fine sons and thanked him for his service to the community, including coaching recreational sports.

“It has been an honor to serve with Mr. Paul,” Stinson said later in the meeting when he presented a plaque from the town to Patin.

Lindsey Stanley and Michael Wright will join the town council July 1, taking the slots once held by Renfrow and Patin.

“This is the first time in the history of Vinton that we’ve had three ladies on city council,” Patin said, “and I believe this may be the answer to cleaning up the city. I can remember my wife. When she believed in something and wanted to do it, it was hard to change her mind.”

Bids go out for water well, City to receive…