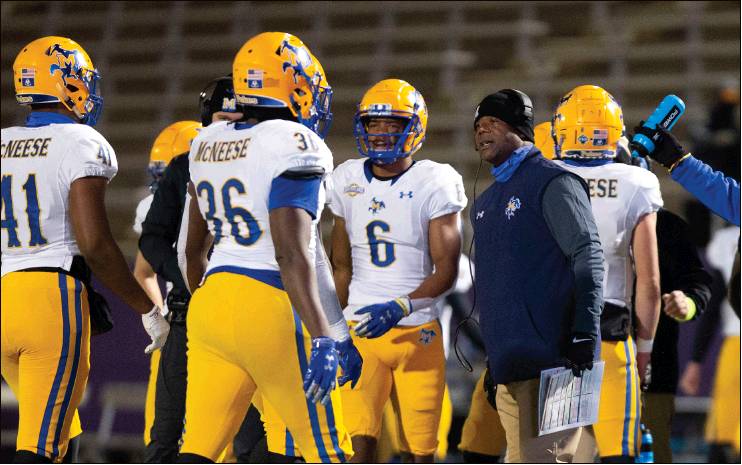 In the first 18 months of his tenure, McNeese State head coach Frank Wilson the the Cowboys have endured many trials. The Cowboys will start fall camp Aug. 4. (Special to the American Press)

For the McNeese State football team, the summer ended with a splash — literally.

Friday, head coach Frank Wilson closed out the Cowboys summer workouts with a trip to the water park in Sulphur.

After spending the summer working under the blazing sun, McNeese players got to enjoy a cooling down period. They will return on Aug. 4 for fall camp, just one month ahead of the season opener at home against West Florida.

“The players have worked really hard so we gave them a little break,” said Wilson.

The surprise road trip was appreciated by the players, but it was also a needed retreat for a group that over the past year has had to deal with just about every type of distraction possible.

All the obstacles have been well documented but they do deserve repeating.

This is a team that has overcome the embarrassment of an academic probation, a pandemic, the season moved from fall to spring, two hurricanes, the loss of their defensive coordinator days before the season opener, a record winter storm and finally a historic flood.

But that is not all.

They witnessed their league all but collapse around them, heard rumors of their own school changing conferences, dealt with the comings and goings of the transfer portal and now play in a world of the NIL, name, image and licensing, where college players can get paid.

The college game they walked into their first day on campus looks nothing like the one they play in now. No wonder they needed a day away from it all to relax.

“So many things have changed so fast,” said McNeese quarterback Cody Orgeron. “Everything is different. Everyday it seems like something changes.

“Still, we have unfinished business here. We want to give the City of Lake Charles a championship.”

It sure tested the head coach, who was forced into crisis management mode before ever being able to be on the Cowboy sideline for a game.

“In 20 plus years of coaching it was probably the toughest job I have endured,” Wilson said. “We had to let the players know that we will prevail and there’s a light at the end of the tunnel. The spring season happened and we started to play our best football at the back end of the season. We came closer together than ever before.”

Somehow the team was able to play in the spring, finishing 3-4 despite starting 1-3. They played their best games down the stretch, including a tough loss on the road in the season finale against eventual national champ Sam Houston State.

“It was a big deal to play in the spring,” said Wilson. “We couldn’t do anything in the fall because we were in a unique situation because some of our guys were in shelters and living in other parts of the region due to the hurricanes.

The Cowboys are picked fourth in the Southland Conference’s preseason poll, which officially means nothing. It only gives fuel to players who are committed to winning.

“The sky is the limit,” Wilson said of his team’s hopes for the fall. “I don’t want to limit us. We have no glass ceiling.”

The reason for that was a solid summer. It was the first time the Cowboys actually got to workout together under the eyes of Wilson since he took over the program in January of 2020. Only other time was during the seven-game spring season, when it was about winning games not building for a season.

“In June we began an eight-week regiment with strength and conditioning and our school work as well,” said Wilson. “We came out of it better, getting bigger, faster and stronger while also excelling in the classroom. The summer was outstanding for us.

“We could not be more excited about this season.”

Just playing is great, but having a full team is even better.

The Cowboys were forced to play the spring shorthanded, leaving them at times with limited options. Injuries and transfers had McNeese making things up as they go.

In one game backup quarterback Walker Wood was the lone running back in the backfield. The offensive line saw true freshmen and walk-ons starting at times. It was not ideal.

It does, however, leave a lot of players on the current roster with experience even if it came under tough times. Wilson used the transfer portal to his advantage this spring and summer as well.

“For every guy that entered the transfer portal, we replaced with an all-conference player,” said Wilson. “And for the guys that ended their eligibility, we added some quality players who will make an immediate impact either now on in the future.”

But working to get better over the summer was even more important. McNeese missed out on that the previous year or so.

Nobody had a better spring than defensive end Isaiah Chambers. The Houston transfer won All-American honors and was the SLC and Louisiana Defensive Player of the Year.

Chambers, who lost his apartment and all his belongings in hurricane Laura, stayed for this fall despite some options to turn professional.

“I’m excited to be back and playing in the fall,” said Chambers. “I feel like when I’m playing my best, we play our best as a defense. I try to stay positive and lead by example. I don’t talk a lot but I try to lead our guys and show them that if they give their best efforts, great things will come.”

If that’s the case, McNeese may make a bigger splash in the fall than the Cowboys did in Sulphur Friday.