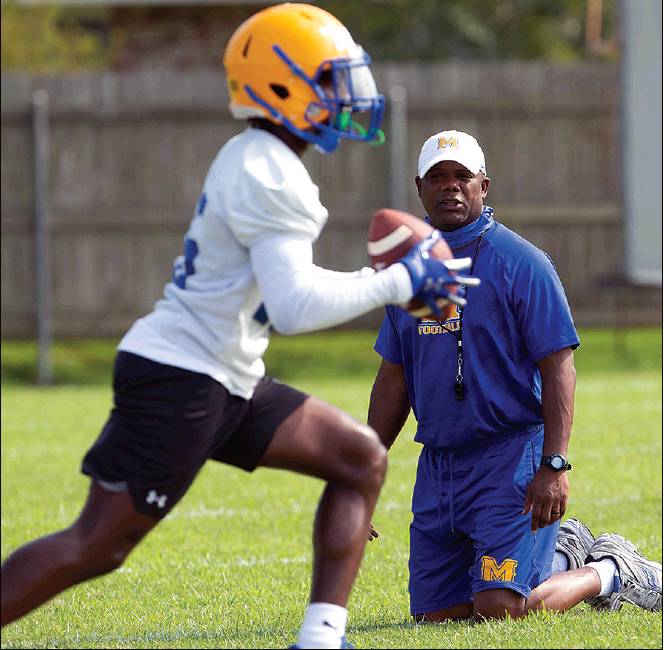 McNeese State head coach Frank Wilson keeps a watchful eye on the first day of practice on Friday. The veterans worked out in the morning and newcomers in the afternoon. (Rick Hickman / American Press)

It has taken 19 months but Frank Wilson finally got a chance to do the job he was hired to do.

Wilson coached his first fall practice Friday at Mc-Neese State, conducting a morning session with veterans and selected newcomers before working out mostly newcomers in the afternoon.

“It is great to be back, to do what we do, to smell the grass and feel it under our feet,” Wilson said. “You take for granted being able to do this. Being back out here, in the fall, it is refreshing.”

Wilson’s journey to Friday’s practices was a long and strange one. Through storms and a pandemic he was able to coach the Cowboys to a 3-4 abbreviated spring season. Now he’s back where he feels like he belongs.

“There is a lot of excitement, lot’s of energy,” he said. “Our team got better today.”

Calling the day a “return to some normalcy,” Wilson made a point to say his team worked hard all summer to get ready for the moment.

“We are bigger, we are stronger, we are faster,” he said. “That’s a credit to the work we put in.”

The players says they feel the same way.

“It is exciting to see what we have,” said offensive lineman Calvin Barkat. “Good to have everyone out there, good to get hit and hit somebody. It was dog-eat-dog with the defensive line on the first day.”

Barkat, a senior threeyear letterman, said after everything the group has been through over the last two years, which includes the team’s embarrassment of being put on academic probation for a season, the players are all on one page.

For six-year redshirt COVID-19 senior quarterback Cody Orgeron it was about getting back to work.

“We have been looking forward to this,” Orgeron said. “It’s important that we got to come out here, fly around a bit and get back to playing football.”

Orgeron said he wants to make sure he leaves McNeese with one thing.

“I don’t want to walk out of here without a ring,” Orgeron said. “That’s important to me. I have enjoyed my time here and I want to give back a championship.”

There are a lot of new faces on the team from the spring, but most have been around campus for some time. Orgeron said it won’t be that hard to get things going.

“We have worked together and I like the way we looked,” he said. “We have a chance to be a really good offense and a special team.”

Wilson said he wants his team to enjoy playing the game they love.

McNeese will do two practices each of the next two days before getting a day off Monday. After that the group will get together for one practice a day.

“We are ready to work hard,” said Barkat. “We know what we can do.”

The Cowboys will open the season Sept. 4 with a home game against 2019 Division II national champion West Florida. Game time for all home games is noon, meaning they better get used to the heat over the next month.

Let’s light this candle: Stadiums will see return of…