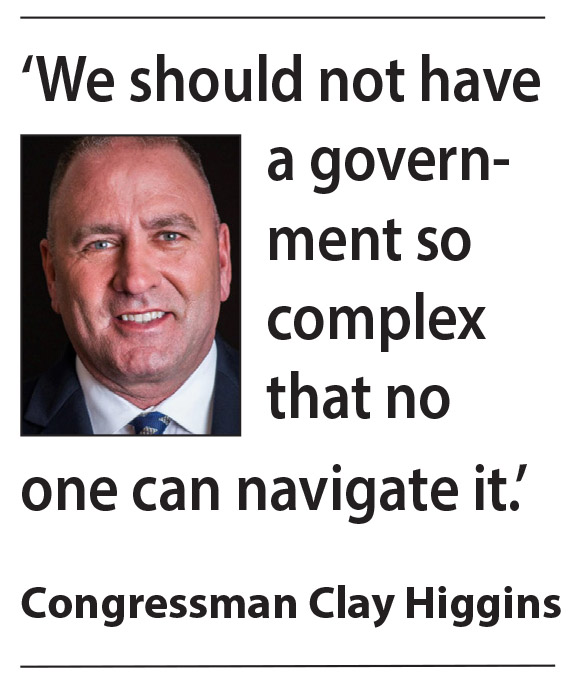 The challenge of navigating government bureaucracy to receive assistance, replacement of the Calcasieu River-Interstate 10 bridge, illegal border crossings and the introduction of the Employee Rights and Freedom Act were some of the topics U.S. Congressman Clay Higgins covered Thursday during a town hall meeting in North Lake Charles.

He was here at the invitation of the AfroAmerican Chamber of Commerce, a nonprofit organization focused on economic development in North Lake Charles.

The event also included a tribute to the late District A Council Member Mary Morris.

“We should not have a government so complex that no one can navigate it,” Higgins said about the difficulty of applying for FEMA assistance after the hurricanes.

“Now $1.4 billion has been allocated to the state treasury and the access to that money has been challenging,” he said. “We’ve worked with hundreds and hundreds of cases individually. It never stops.”

Higgins said he and his team generally leave a town hall meeting with 20 to 30 cases (requests from help from constituents) to address.

He agrees that the federal government should fund the I-10 bridge and acknowledged the public-private partnership would secure funding in a more timely manner and get the bridge built faster.

“The downside is you’ll have a toll, and I don’t have a problem with that but I don’t think the local folks should have to pay.”

Higgins said residents from certain areas could receive a special pass to allow them to cross the bridge without paying.

“I have the right to make suggestions to my state and local officials as a citizen,” he said after outlining this suggestion. “I don’t have any authority, but I do think it’s a pretty solid idea.”

He also said that he is pushing for local workers on the project.

On the recent problems at the border, he reminded the audience that the United States has legal ports of entry and a “flexible and compassionate” approach, but the magnitude of illegal crossings threatens to overwhelm available resources.

People from the audience spoke out against and in favor of Higgins’ Employee Rights and Freedom Act. It states, “It shall be an unlawful employment practice for an employer to require an employee, or an applicant for employment with such an employer, to undertake a medical procedure, including a vaccine.”