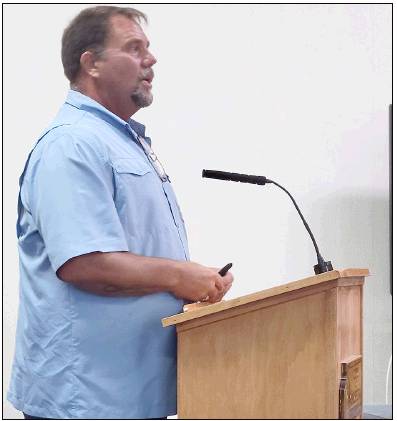 The Rev. Jay Lawson of Open Door Biker Church asked the council to give him 30 days to consult legal counsel before they voted to approve a liquor license for a nearby convenience store. (Rita LeBleu / Southwest Daily News)

The Sulphur City Council approved a liquor license for Chargepoint, a convenience store at 444 West Burton St. — located within 300 feet of a church and school. Voting against was Mandy Thomas.

The Rev. Jay Lawson, pastor of the Open Door Biker Church asked council members to deny the license. The church also operates a drug and rehab program for men. The convenience store would likely not only sell alcohol, but also pornography and Kratom, as other convenience stores do.

“I did not come to the city with this issue,” Lawson said. “The city came to me and asked me if he would approve the liquor license. I told them I would oppose it,” Lawson said.

He said he was told about a grandfather clause that would allow for the liquor license. He said he asked to see this clause and no one has complied. He also questioned how the owners, who are new, could be grandfathered in.

Speaking on behalf of the owner, Burt Parham said the store has operated for a significant amount of time and received their last renewal as late as March with no change in ordinance, zoning or use.

“The city council is fair to vote in favor of keeping the church mute,” Parham said.

Open Door Biker Church member Lonnie Fruge said, “The fact that we’re talking about voting for something indicates you have the right to vote or deny it. As a community, it is our responsibility to support rehabilitation whenever and wherever it occurs.”

Ethan Miller asked, “If this is black and white and liquor is not allowed to be sold within the parameters of the distance in the ordinance, please show us tonight how that will be allowed based on the ordinance.”

“If the convenience store was there first, that’s one grandfather clause,” Cole said. “If the business is operating on the day of the ordinance, that’s another.”

Cole said the office of the Louisiana Alcohol and Tobacco Control advised the city that it is not requesting an exception from the city council, which is what initially started the engagement with Lawson.

“This has happened before in other instances where people do need an exception,” Cole said.

This request is made when the state needs to see that a business is compliant with local ordinances.

“Were ATC to think that this were violative of the 300-foot rule, then ATC would require you to vote on an exception then vote to give them a liquor license.”

Cole said that if facts turn out to be different than how the business owner’s attorney presented the information, the ATC reserved the right to do a further investigation.

“It’s not my view, but ATC’s view that they are not asking for an exception along with the permit,” he said.

Cole said if the city denies the liquor license without good cause, a lawsuit could be filed. The judge would decide the matter and if the city was on the losing end, it would be responsible for paying the attorney’s fee of the lawsuit.