Going with the grain, Wood working wherever he’s needed 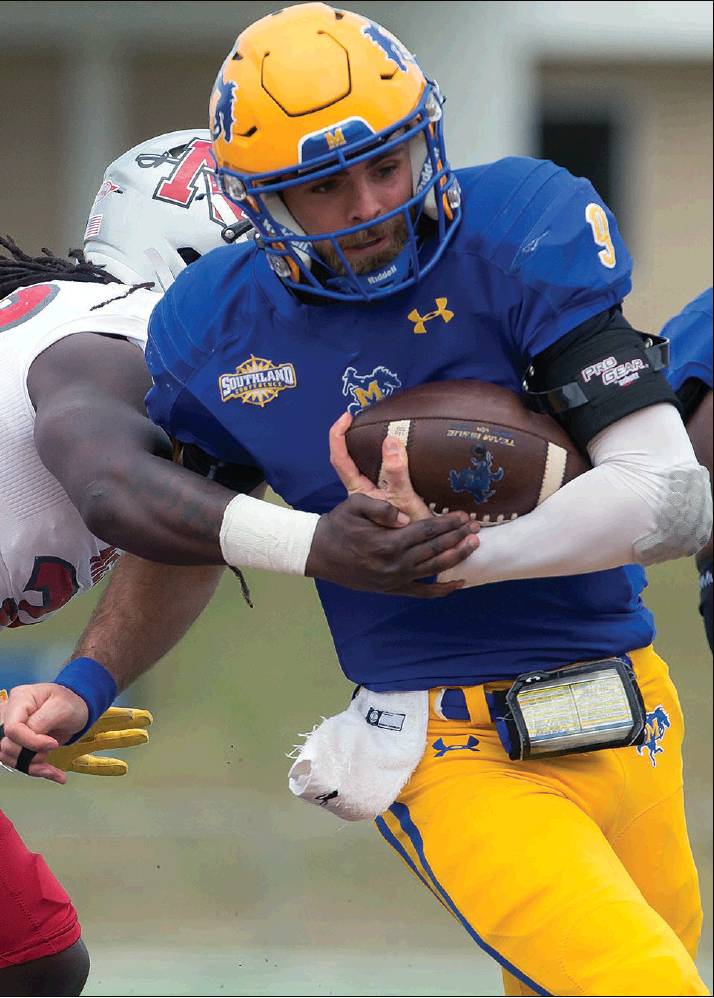 Rick Hickman / American Press Walker Wood, a transfer from Kentucky, says he’s willing to do whatever he can to help McNeese State win football games. The onetime quarterback has proved that with his willingness to play wherever the Cowboys have deployed him, including running back and receiver.

During the spring football season, a lot of strange sights could be seen on the field.

From opening during an ice storm to closing against a school leaving the Southland Conference, McNeese State’s first — and hopefully lone spring campaign — had its share of oddities. However, none was more strange than what took place in Week 5 at Northwestern State.

Seeing backup quarterback Walker Wood race onto the field was nothing new. He had a handful of plays he was involved in, especially around the goal line. But this was noticeably different.

Wood wasn’t lining up behind center, or in shotgun formation. The transfer from Kentucky was in at running back. In fact, he was the lone running back.

Injuries had forced Wood into an emergency situation as the lone back in the backfield.

“That was interesting,” Wood said. “I never expected that when I came here, but you do what you have to do.”

“We had a lot of injuries so I had to step in,” Wood said. “Anything the team needs I’ll do.”

Asked what he learned from the afternoon Wood said, “I’m a lot lighter than the guys inside the trenches I kept running into.”

Wood said the situation at running back doesn’t call for him to step in this fall.

“I think those days might be done, but I’m ready to do whatever the team needs me to do,” he said. “I had a lot of fun playing back there last year.”

With Cody Orgeron, a sixth-year senior established as the starting quarterback, Wood, a junior, will likely have to wait another year to get his shot at playing time under center. However, he may find himself on the field at another position.

Wood has been seen working out at wide receiver, where his red jersey stands out on the practice field.

“At the end of the day it’s just playing football. I have been playing it all my life.”

This may be more than a passing practice fancy. Last Saturday, during the Cowboys’ first scrimmage, Wood did not wear a red jersey and never took a snap from center.

He still had an impact on offense, leading the club with four catches for 65 yards.

For head coach Frank Wilson, it’s a matter of getting a talented player on the field.

“(Walker) is very versatile,” Wilson said. “He can help us in a lot of ways. We may even work him in at quarterback.”

With all the talk of the NCAA transfer portal and players moving all about the country for better opportunities, Wood said he decided to stay put.

“This has become my family and I think we have a chance to do something special here and I didn’t want to miss it.”

Wood also knows that being a backup quarterback means you are one play from having to take over the team.

“You have to be ready and playing other positions helps keep me ready,” he said.

In Wood’s case he has shown that he is ready for just about anything and willing to do about everything.