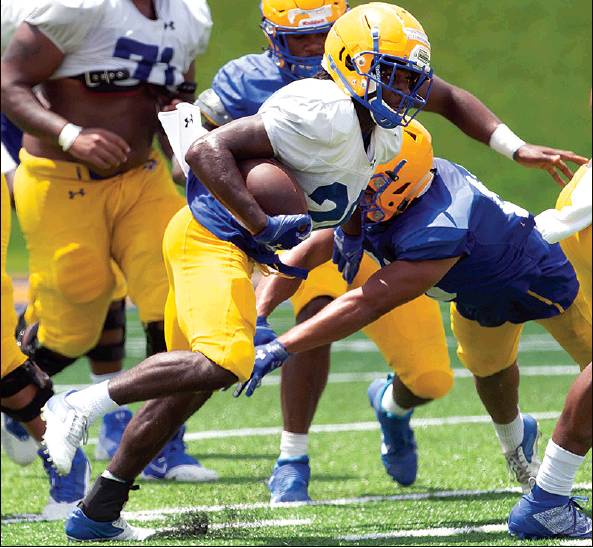 McNeese State running back Deonta McMahon and teammates will scrimmage at noon today. The workout will go a long way in determining the depth chart. (Rick Hickman / American Press)

While the public is invited, it will be a working event as the Cowboys start to put the finishing touches on this fall’s team. The scrimmage once again begins at noon with temperatures edging toward triple digits.

The reason for the noon start is to closely follow the time frame of all home games this season.

Head coach Frank Wilson said it will be different from last week’s scrimmage with game situations and down and distance on the scoreboard.

“We want to see how close we are to being game ready,” Wilson said. “It is important that we get this last real physical scrimmage in. We will put a lot of people in different situations.”

Wilson said the depth chart is starting to take shape and the scrimmage will have an impact.

“It is written in sand, not ink,” Wilson said of the depth chart.

With starting jobs on the line and time winding down, the scrimmage holds importance to the players.

“You really want to play well and get in game conditions,” said defensive back Colby Richardson. “We have a very close team and are looking forward to the season. But the completion on the field is tough and I think will be turned up.”

During last week’s scrimmage both sides of the ball had their moments, with the offense showing big-play signs. That included two touchdowns by graduate transfer CeeJay Powell.

“You want to keep getting better, keep being consistent,” Powell said. “You want to clean up the mistakes and have a clean scrimmage.”

That seems to be everybody’s main goal as the Cowboys look to build on last week’s first scrimmage.

“We want to take the next steps,” quarterback Cody Orgeron said. “We want to clean up our presnap penalties we had.

“We also want to keep improving. That’s important. We have to get better every time we are on the field.”

Orgeron, a six-year senior quarterback, finished the last scrimmage 12 of 15 for 136 yards and three touchdowns as the offense had 461 yards on 62 plays.

“Last week opened my eyes as to how good this offense and football team can be,” he said.

Wilson said players should expect to work 52 plays each.

“You always want to see progress no matter what you are doing,” he said.