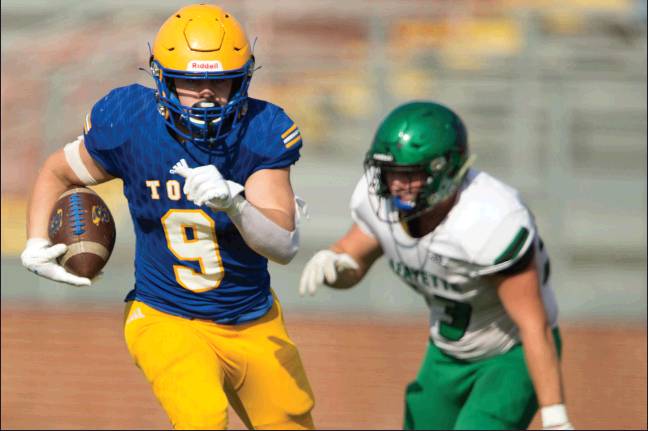 It may be one of the youngest teams in program history for the Sulphur Tors this season, but it is not going to stop them.

“They are playing varsity football for the first time, and they didn’t play much JV football last year,” head coach Chris Towery said. “I think they are going to compete hard. I think that is going to be the strong point. How quickly we can get where we can execute on a high level, I don’t know yet. But these guys will compete hard.”

The Tors have just nine seniors and will have to grow up quickly in one of the most competitive Class 5A districts in the state.

“It is going to be about how quick we gel as a team and how quick our guys grow up and get over the fear factor,” Towery said.

Sulphur is hoping to put the hurricanes behind them after falling just short of the playoffs in 2020.

“I think that we are past all of that,” Towery said. “It will be a few years before life is back to normal around here. Hopefully, that doesn’t become a factor with what is going on around here.

“Any time you have had an event like that, it is going to linger around. normal yet.”

“Corey Hyatt is a good football player,” Towery said. “He is a big kid that can run well, and we are going to use him on offense as a running back. He is a physical, long kid. Lemaire can flat-out run. He is definitely a kid that can make plays. We have some guys that can run pretty decent and, hopefully, they can be solid playmakers for us on that side of the ball.”

The Tors will base out of the 4-2-5 but will have something for every type of offense. “We get in a ton of formations,” Towery said. “It creates mismatches, outflank people, create leverage for our guys up front.

“We just have to make sure to tackle. We play people that may get you out in space, and they are going to create those situations where you have to make plays in space. That is going to be the key for us defensively. We can’t give up big plays.”

The Tors return three on the offensive side in tackle Dawson Lebrun, senior Tag Stelly, who played every skill position last season, and tight end Kaleb Vizier, who has bulked up since last season.

With Vizier standing at 6-5, 220-pounds, and freshman John David Lafleur at 6-6, 231, and 6-2 sophomore Austin Babez, the Tors will have a trio of massive tight ends for Stelly, who will split time at quarterback with junior Gage Trahan.

“We try to do some things match up wise with him (Vizier) and John Davis Lafleur, a freshman that is 6-6, 231,” Towery said. “We are going to try to get the ball in their hands.”

“With what we do, both of them (Stelly, Trahan) are good,” Towery said. “Both bring a lot to the table and have thrown a lot this summer.

Meteorologist: All areas of La. coast at risk