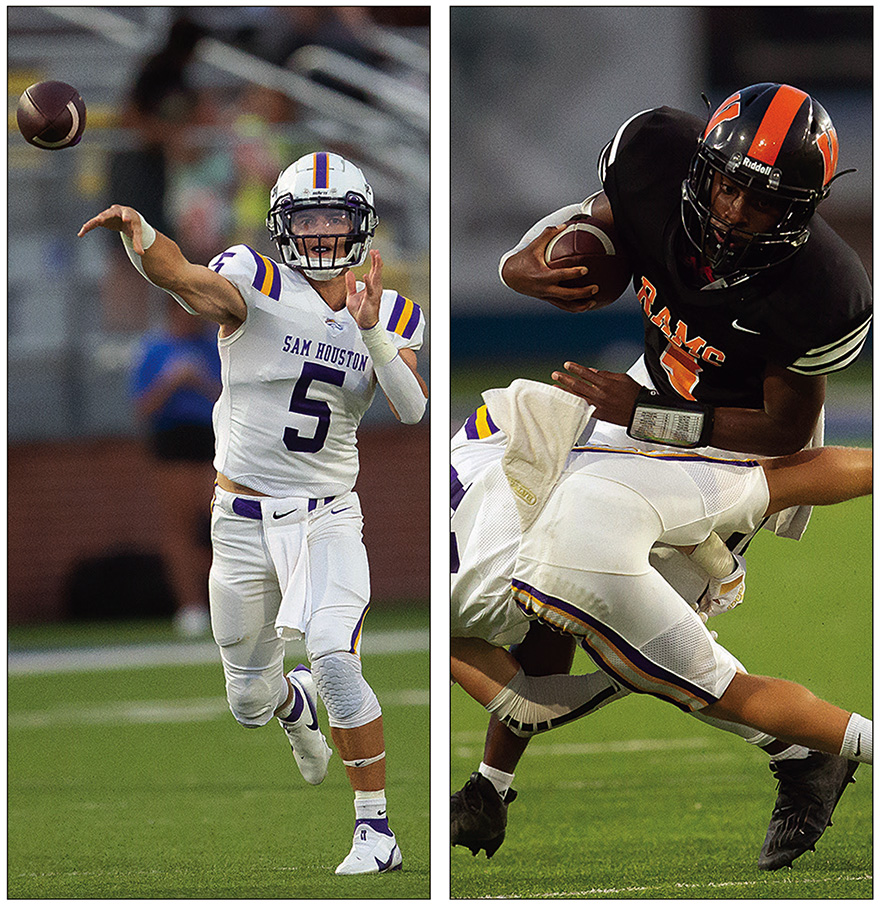 It was a big day for quarterbacks as Sam Houston and Westlake battled to a 21-21 tie Thursday night in the second game of the Sulphur/SPOT Billy Navarre Jamboree.

Westlake dual-threat senior Jamaal Guillory ran for 161 yards and two scores on 12 carries and completed 6 of 11 passes for 72 yards.

Sam Houston senior Andrew Glass completed 14 of 23 attempts for 181 yards and two scores with one pick. He also had a 49-yard touchdown run.

Down 13-7 at the break, the Broncos shook off nearly two years of rust and scored twice in just over 6 minutes to take a one-score lead.

On the Broncos’ next drive, Glass completed a 36-yard pass to Dennis Gardere on third down, then a 4-yard touchdown to Dylan Abshire for a 21-13 lead.

Westlake forced Sam Houston to punt with 1:41 left and looked like it had the winning touchdown with no time left when Guillory connected with Connor Dickerson from 22-yards out, but a holding call negated the score.

The Rams had one more chance, but Guillory was picked off in the end zone by Quinton Simon.

In the first half, Westlake didn’t look like a team that went winless a season ago. The Rams pressured Glass and disrupted the backfield. On the Broncos’ first play, Westlake’s Bray Tradewell caught Sam Houston receiver Quinton Simon in the backfield on a shovel pass.

Rams defensive linemen, sophomore Joseph McGee and junior Gavyen Carlin, each had a tackle for a loss in the first half, which ended on an interception by junior Brandon Allen.

Guillory ran for 129 yards in the first half, including a 72-yard sprint up the middle for a 7-0 lead 3 minutes into the game.

A risky play late in the first half paid off for the Rams. Guillory was being chased in the backfield and lofted the ball up for what looked like a certain interception. But Gavin Robertson was able to catch it at the 3-yard line, and Brandon Jupiter scored from 1-yard out to put the Rams up 13-7.