Through the eyes of a child: Robinson finds beauty in photography 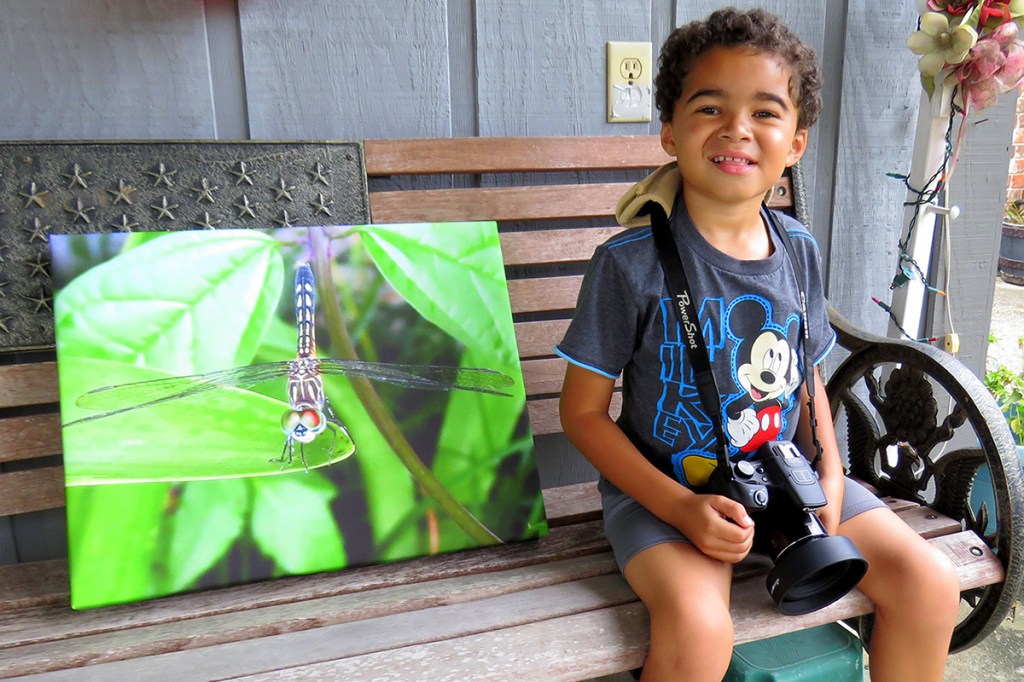 Alex Robinson is learning about photography and nature. This photo shows him and his recent photograph enlarged and on canvas. (Special to the Southwest Daily News)

Seeing the world through the eyes of a child can help put life back in focus. Five-year-old Alex Robinson finds beauty in the backyard and photographs it. Introduced to photography by his grandmother Vicki Sensat, the hobby gives them something engaging and productive to do when they spend time together.

“I have taught him to play ball and tennis, but a recent shoulder surgery sidelined me,” she said.

As far as considering a future career that pays him for his work, that’s a much less interesting conversation topic.

His subjects, so far, are mainly birds, dragonflies and butterflies captured in Sensat’s backyard. Sometimes they drive to wooded areas and marshes. In addition to learning about photography, he’s learning about identifying birds and their habitat.

He started with a plastic ‘camera,’ says his ‘grammy.’ Sensat is a hobby photographer and has accepted assignments pro bono.

“I delete a lot of his photographs, but some of them rival mine,” she said. “About a month ago, I showed him how to use a small camera I have, one of those small digital point and shoot types with only a screen, no viewfinder. About a week later, he got a little frustrated with that one so I moved him to use my older Canon Powershot SX40.

“Now he uses a Powershot SX60, which is not the latest available model.”

The camera is part of what she “wears” when she steps outside. Now Alex wears his. Other grandparents have quizzed her on how to start their grandchildren taking pictures.

“If that’s what comes from this article, then I think that’s the best thing ever,” she said. “It has the potential to be a life-long passion.”

“If you want to zoom in, you’re limited,” she said. “Of course, it is more convenient and most people have one.”

Getting out there and doing it is more important than the equipment.

“You focus, hold it very still and snap the picture,” Robinson said.

Sulphur resident Roy Vaussine happy to be back home