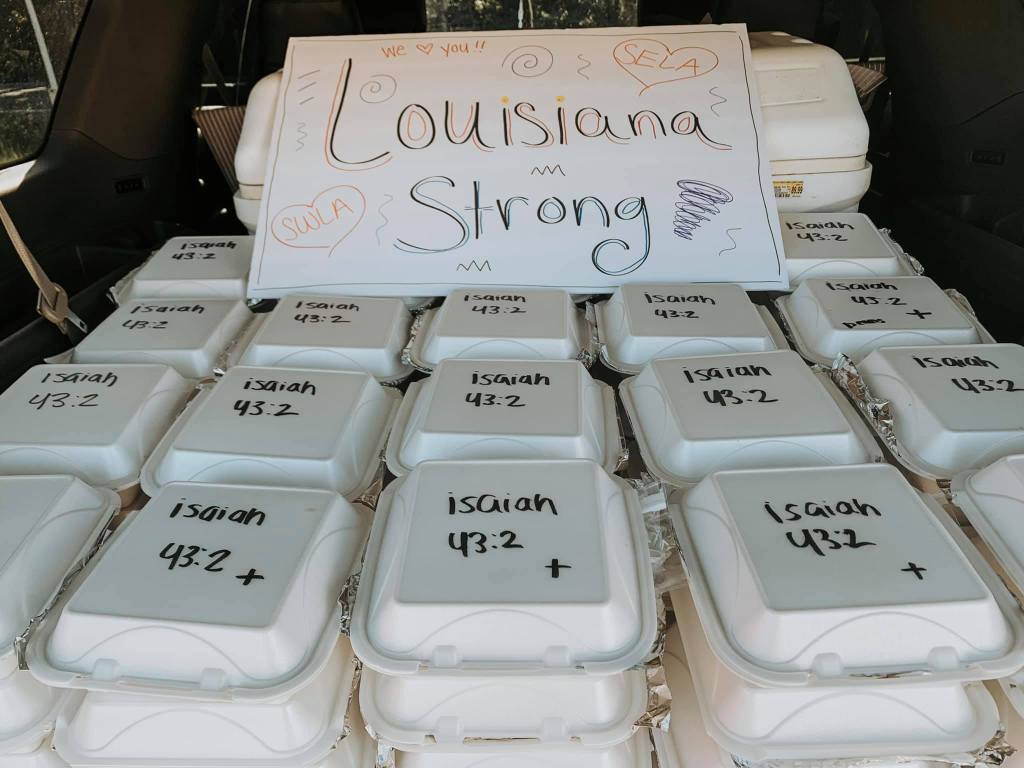 Meals sit ready to be delivered to Hurricane Ida evacuees at a hotel in Vinton. Tanner and Kaitlyn Guidry helped spearhead the effort.

Kaitlyn Guidry, mother of four and owner of Olive and Cedar (decorating services) was out to dinner with her husband Tanner Aug. 29. They were without their two sets of twins under the age of 3, a rare and treasured treat.

“Could you cook jambalaya tomorrow,” she asked him and he knew. She meant cook for the Hurricane Ida evacuees staying in a Vinton hotel without her even saying so.

He agreed to do so and added, “You always have us into something.”

Guidry sent out a few messages to friends and by the next morning she had a big pot dropped off at her house. A Vinton business donated sausage. A Vinton restaurant donated to-go boxes.

The couple made a Sam’s run and started cooking with a timeline in mind. She looked at the clock at 3 p.m. and started wondering if they’d pull off 120 meals for evacuees in a Vinton hotel for 5 p.m. delivery.

“I don’t know how we did it, other than God,” she said. “It was a beautiful day and we never got stressed.”

She had prayed for God to take care of it and Guidry says he did.

She asked her husband if he’d say a brief silent prayer over each meal, nothing major, just an acknowledgement to honor God as the main ingredient in making this Southwest La. jambalaya a comfort and a reminder of his presence and the good in people. He agreed.

They remembered spending two weeks in a Houston hotel after Hurricane Laura with their four babies.

She remembers asking God, why.

“I really wanted God to be a part of this, not just this part, of everything in my life,” she said. “Serving God and loving each other are the most important things we can do.”

When she was growing up, she compared her talents to others in the church who sang, played an instrument or preached.

At the age of 16, she realized her ministry was outreach and she’s made serving her purpose realizing she is ministering even when she serves her own family in their home.

After the food was boxed up, she wrote Isaiah 43:2 on each box top.

She said the evacuees were fed, but it was her and her husband that received the blessing.

She cooked again on Friday with the help of five ladies who volunteered help in preparing chicken spaghetti, green beans, brownies and cake.

They fed 200 a warm meal prepared from the heart, prayed over and meant to keep faith fueled in a difficult season.