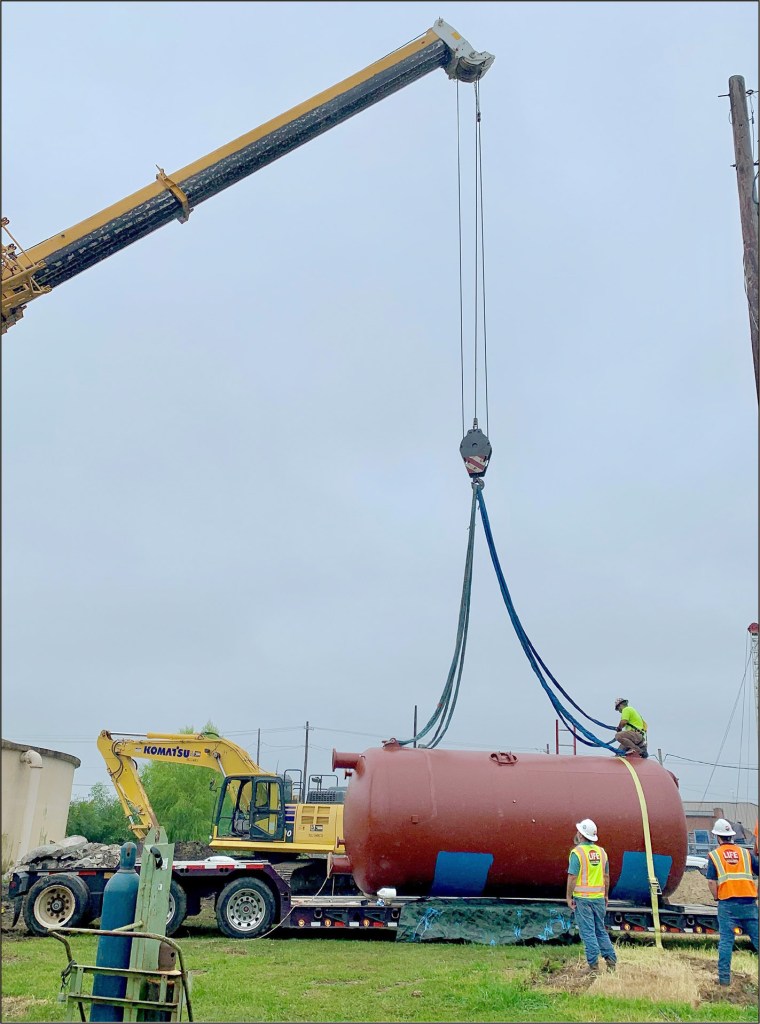 Special to the Daily News The first stage of the Verdine Water Plant improvements is underway. Shown is the offloading of one of the two new vessels that will help filter the water. More are expected before the end of the year and water treatment will be added at the beginning of next year.

Redistricting and a visit from Miss Louisiana were highlights of the Sulphur City Council meeting held Monday.

Results from the 2021 Census dictate that lines will have to be redrawn.

“This is the first of many steps associated with the one in every 10 years redistricting that has to occur after census data is released,” said City Attorney Cade Cole. “This is normally something that would have occurred weeks ago, but because of the pandemic, the federal government delayed releasing the data.”

Cole said upcoming elections require the city do the best it can under the circumstances. Maps were presented in draft form to council members and the public who attended the meeting.

“It is just a draft and will be subject to amendment by council throughout the process,” Cole said. “When you come back in October, city council will introduce the plan as a formal ordinance.”

Public hearings held after the plan is presented as a draft will allow residents to give input. A total of three public hearings will transpire before the draft will be finalized. That map is available for the public to review in the office of Arlene Blanchard and on the city’s website.

“You’re required to get within plus or minus 5 percent of the ideal goal, and the ideal goal is that if you divide the city’s population by five, the five districts would be equal. To make those adjustments, you basically have to move the lines in every district. It has a domino effect,” Cole said.

The largest growth area is south of town near the Rouse’s Market, an area that wasn’t in the city limits 10 years ago and has grown to around 1,000 people due to new residential development.

Key to the City

Mayor Danahay presented Julia Claire Williams, Miss Louisiana 2021, with a key to the city. Williams was living in Kinder when she was crowned in the June pageant, but has ties with Sulphur that run deep.

Williams said Miss Louisiana, a Miss America organization, is a “scholarship competition rather than a beauty pageant.” She has an undergraduate degree in biology with a minor in chemistry with a pre-med concentration in preparation for medical school. Her personal social impact initiative is titled, “Find your Freddy,” inspired by a second-grade friend and classmate.

“All they want is to be loved and for you to know that their disability in life is how others might perceive them,” she said.

Delivery and installation of the first two filter tanks required to begin improvements to the Verdine water plant are on track, according to the timeline announced earlier in the year and to plans made in 2019, before the hurricanes and pandemic interruption.

“We’re hoping by the end of the year, the beginning of next year that all those vessels will be replaced and in service,” Danahay said. “On top of that, we have a new well.

“We’ve been in pre-construction with the contractor. They will be beginning that process very soon. Probably in another two to three weeks, we will have three working wells and soon four.”

A water pre-treatment system will be installed next year, according to the mayor.