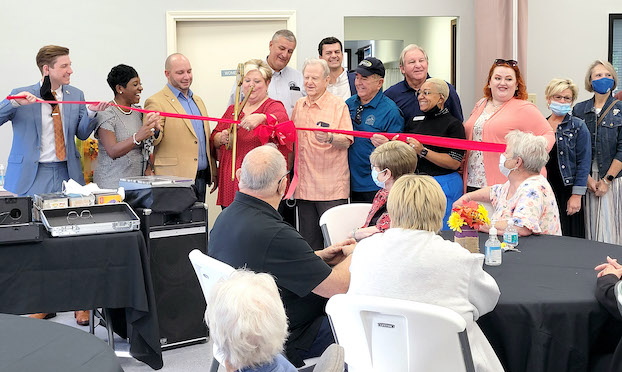 Shown at center in red with the large scissors is Pam Golding, coordinator of the Westlake Senior Center. Local officials and other guests joined her for a ribbon cutting ceremony when the center reopened on Wednesday. (Rita LeBleu / Southwest Daily News)

The Westlake Senior Center is back in business.

Hurricane Laura damage and other problems kept the doors closed for over a year, but the large gathering room quickly filled with area seniors, age 60 and over, pleased to have their center restored on Wednesday.

Barbara Sonnier was one of those happy people. After her husband died, she decided she needed to get out and socialize. That was 15 years ago, and she had been enjoying interacting with others and making new friends until the building was damaged.

“This is great. I’m so glad it’s opened again,” said Susan Rice. “It’s like coming home after the hurricane.”

“Tomorrow, will be our first bingo game here since the storm,” said Alan Borel, a senior center employee.

Bingo is the most popular activity. However, other events and activities such as crafts are offered.

Insurance declared the building at 2001 Jones St. 70 percent damaged after Hurricane Laura. When workers were making repairs, termite damage was discovered requiring an additional $100,000 in repair costs, which the City of Westlake paid for, according to Calcasieu Council on Aging Executive Director Jacqueline Greene.

Greene paid tribute to the late Lillian Washington, a longtime Westlake senior who was instrumental in getting the center established, in her opening remarks.

“I think if we’ve learned anything from what we’ve gone through, the pandemic and hurricanes, it is how important it is to take every opportunity to cherish family, be a good friend to our friends and to be a good neighbor to our neighbors and community. I think it is a stronger, wiser people I see before me today as we cut the ribbon,” she said.

The Westlake Senior Center is the sixth of seven CCOA locations to re-open since the hurricanes.