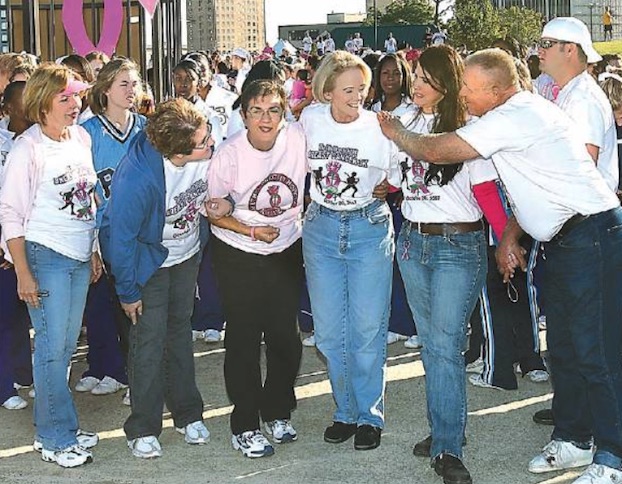 The Ethel Precht Hope Breast Cancer Foundation has been dissolved and its assets donated to the West Calcasieu Cameron Hospital Foundation — a move former board members believe the late Precht would have been thrilled to see come to fruition.

Precht died in 2017 of pancreatic cancer, after beating breast cancer more than three decades prior. She previously told the American Press her breast cancer diagnosis ultimately transformed her from a shy, down-to-earth wife of a rice farmer into a powerhouse advocate whose foundation would ultimately raise $2 million to assist Calcasieu and Cameron residents fighting the disease.

“It really gets to me because I never in my wildest imagination thought that a country girl from Sweetlake that nobody knew could get people to care enough to come out and show that they support us, and people really do care,” Precht said in a 2012 interview with the American Press. “That is something so near and dear to my heart.”

In 2004, Precht formed what would become an annual three-mile walk around the Lake Charles Civic Center each October, which is Breast Cancer Awareness Month.

“The walk just got so big that she eventually formed a nonprofit foundation in 2008,” Denise Foster, a former member of the original foundation, said. “Through that foundation, we helped thousands of local survivors and patients.”

Foster said the board decided to ask West Calcasieu Cameron Hospital to “take up the torch” to open even more doors for local cancer patients.

“There are going to be so many people who are going to benefit from the continued work of Ethel’s legacy,” Foster said. “West Cal Cam welcomed us with open hearts and this move will open a lot more avenues for our community. We want people to know this program is still alive and well and ready to help.”

Ann Billeaudeaux, executive director of the WCCH Foundation, said the work Precht has done for local breast cancer patients and survivors will continue through this new foundation that will continue to bear her name — the Ethel Precht Hope Breast Cancer Program of West Calcasieu Cameron Hospital.

“Everything that Ethel and the board raised stayed here to help our local patients and it’s an honor that the board trusts us to carry on this legacy,” Billeaudeaux said. “Individuals do not have to come to this hospital in order to benefit from this program. Anyone with breast cancer who resides in Calcasieu or Cameron parishes is eligible to apply for assistance.”

To be considered for assistance, residents can apply at wcch.com/ethelprecht or call 527-4144. The assistance, up to $1,200, can go toward things such as medical expenses, special supportive garments, Lymphedema sleeves and prostheses.

“For people right in the middle of fighting the ugliness of this disease, we’ve also kept their lights on because they couldn’t work during their chemotherapy treatments,” Foster said.

The assistance is available to both women and men, who also suffer from the disease.

Heather LaBauve, WCCH Breast Health Navigator, said she works directly with patients from the beginning of their breast cancer journey.

“I see the shock, fear and worry in their eyes,” she said. “One of the biggest concerns, for most patients, is the financial burden often associated with a cancer diagnosis. They are worried about how they’re going to pay for their treatments. The financial burden prevents some patients from getting screened in the first place.”

LaBauve said she is honored to be part of this new program.

“I’ve seen directly the positive impact the Ethel Precht Hope Breast Cancer Foundation has made in the lives of breast cancer patients and survivors here in Southwest Louisiana, and now to be able to be a part of this program is really a career highlight,” she said.