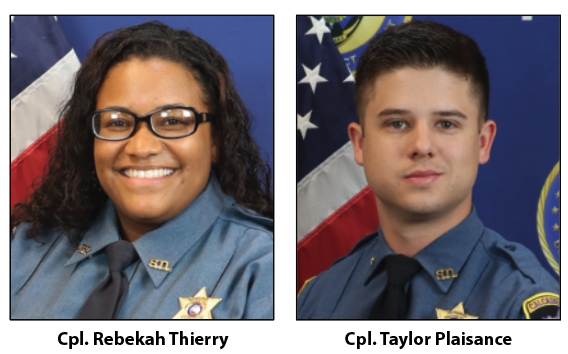 Two deputies with the Calcasieu Parish Sheriff’s Office are taking on the responsibility of bringing the invaluable nationwide Drug Abuse Resistance Education (D.A.R.E.) program to local youth, after graduating this month from the program’s instructor certification course.

CPSO Cpls. Rebekah Thierry and Taylor Plaisance graduated alongside 15 other members of law enforcement from across the state who all completed the two-week, 80-hour certification course in Bossier City.

They will now make eight total deputies with CPSO who are certified to teach children in elementary and middle schools about the dangers of drugs, bullying, prescription drug abuse, internet safety and gangs.

Plaisance began his career with the department in October of 2018 in the corrections department. In 2020, he transferred to patrol and this May he realized his passion by beginning to work with area youth. He dedicates his time attending a Junior Deputy Program on Saturdays, and has begun teaching the D.A.R.E. program at Gillis Elementary during the week.

“I personally think D.A.R.E. is important because we are given the opportunity to facilitate the knowledge with our youth of making good decisions and becoming a model citizen. It all starts with them, and I feel blessed to be given this opportunity,” Plaisance said.

Thierry started her career with CPSO in January 2016, and over the years has worked in several departments including dispatch, corrections, and classifications within corrections before she was ultimately selected for the D.A.R.E. position in May of this year.

When asked why she believed the D.A.R.E. program is important, Thierry said it is vital because it educates youth on much more than just the dangers of drug abuse.

“D.A.R.E. also teaches lessons regarding bullying, and effective resistance techniques and refusal skills so children can confidently say ‘no’ and walk away from anyone offering them drugs,” she said.

“I love being a D.A.R.E. officer and working with the Junior Deputy program within my community because it inspires me to bring a stronger connection between our community and law enforcement through positive influences and leadership.”

Sheriff Tony Mancuso commended the two new graduates, and said the D.A.R.E. program continues to “hold a special place” in his heart because it is where he himself spent much of his time early in his career.

“Cpls. Thierry and Plaisance attended a rigorous two-week, 80-hour training course to be certified as D.A.R.E. instructors; I know from experience it is no easy task. These deputies are dedicated to fostering positive relationships with the youth in our community and teaching them the tools they need to make positive decisions,” he said.