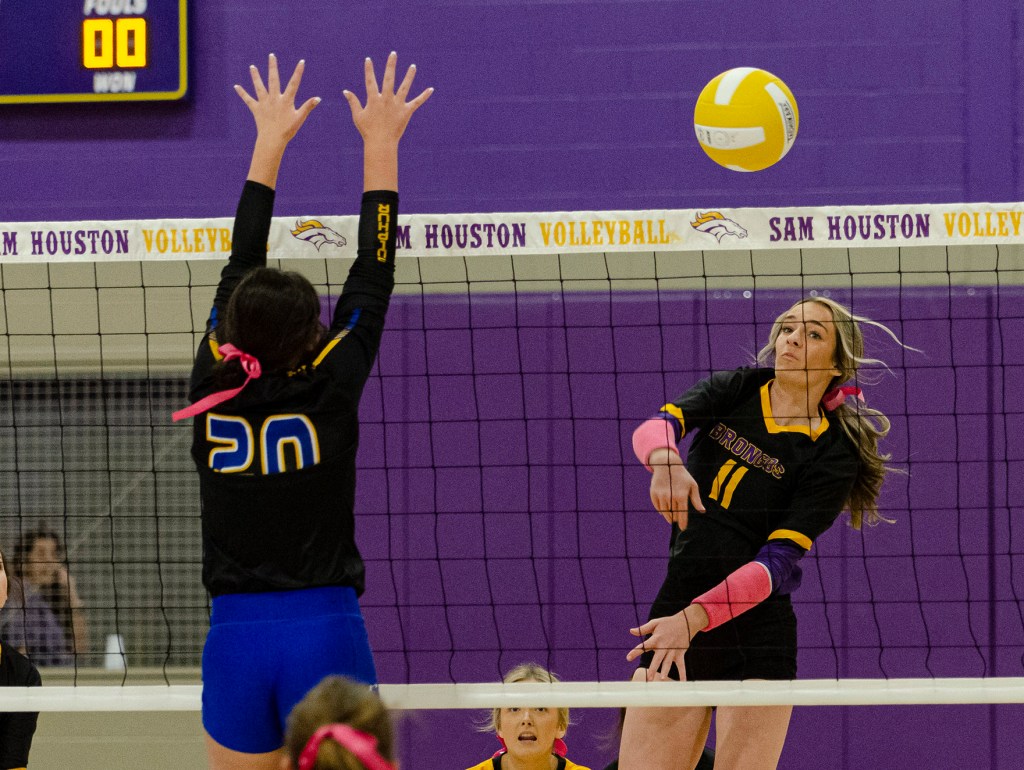 Sam Houston’s Emma Gentry hits the ball over the net during a district match against Sulphur Tuesday. Gentry led the Broncos to a 25-22, 25-17, 25-16 win with seven kills and five digs. (Rodrick Anderson / American Press)

MOSS BLUFF — Sam Houston overcame early struggles to beat Sulphur in straight sets 25-22, 25-17, 25-16 Tuesday and clinch at least a share of its first district championship since 2019.

“I am excited,” Sam Houston head coach Rene Fontenot said. “Tonight is big. In our district, it could be anybody’s game.

“We just struggled to get things consistently going. It wasn’t very fluid, but they followed our game plan. We made a few adjustments.”

Sulphur (20-9, 4-2), last year’s district champ, jumped to a 4-0 lead in the first set with the help of Keelie Seaford’s three aces, but Sam Houston battled back to tie it at 7-7 on an ace by Kat Manuel. The set went back and forth before the Broncos took control with a 4-0 run with a kill by Mallory Wills and Addie Melendy’s ace.

The second set was also a back-and-forth battle before the Broncos used a 7-1 run to pull away. The Broncos trailed early in the third set 3-1 but settled down to close out the match.

“They looked so nervous in the beginning,” Fontenot said. “They looked calmer and settled in, so that was better.

“They started relaxing and playing. It is exciting to have all this, but it is also out of the norm. This is the second time the band has come, and it is amazing.”

The Tors owned at least a two-point lead in each set but were plagued by errors, including eight on serves in the first set and six in the second set.

“On our side, we just didn’t play to the best of our ability tonight,” Sulphur head coach Bridget Coppels said. “It stinks because this was a wonderful volleyball environment.

“The band and the fans were packed to the top bleachers and we just didn’t play our best volleyball tonight, so that is a bummer. But the best thing about volleyball is you get so many games in a season, so tomorrow we will go back to practice. We have another good Southside team on Thursday, and another opportunity to get a little bit better than we did tonight.

“With all the errors we made, we still made it as competitive as possibly could be. I am proud of them for that, but we really need to do a better job of cleaning up the errors on our side.”

The Tors got 13 kills from Finli Dennis, while Seaford finished with six kills, four aces and 16 assists.

Both teams entered the game in the top 10 in the Division I power ratings.

Kings for a day, Cowboys solve Ward, UIW with…