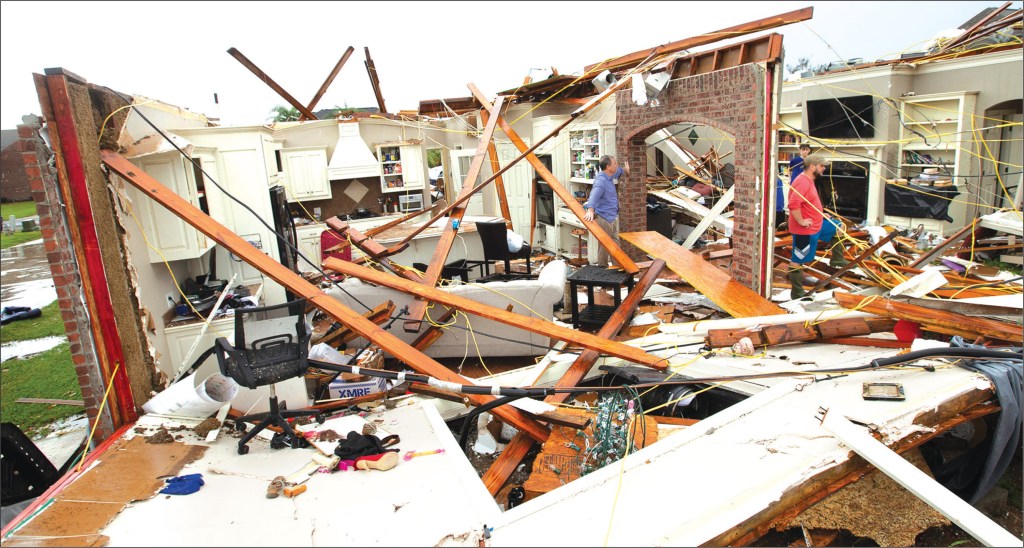 Residents in the Ham Reid Road vicinity survey damage to a home destroyed by a tornado in Wednesday’s storm. (Rick Hickman / American Press)

Still reeling from multiple hurricanes, a flood and a freeze, Southwest Louisiana is now recovering from a series of tornadoes that touched down Wednesday afternoon in south Lake Charles near Ham Reid Road and north Lake Charles in Greinwich Terrace.

A section of Paul and April Pettefer’s home on Hemlock Street, just off Ham Reid Road, was split open after being severely damaged by a tornado. Outside, two cars parked in the driveway had their back windshields blown out by the storm.

April Pettefer said she and her daughter, Abigail, sought shelter in a bathroom. Paul was not home at the time. Everyone, including their three cats and one dog, was unharmed following the storm.

“I heard wind and noise and something hitting the window and thought this sounds like it could be serious,” she said. “We just kind of stood in the bathroom, and it really was fast. By the time we realized what was happening and got there, it was over.”

Immediately after the storm, Pettefer’s family and her fellow church members were gathering belongings from the home and placing them in a moving truck. Pettefer said the family had already purchased another home, but were waiting to finish cosmetic work on it before moving in. The Pettefer family has lived in the Hemlock Street home for more than 20 years.

“The Lord has protected us,” she said. “We have a place to go. We’re thankful we’re fine, and most of our important things are fine.”

“For Laura, we had to get a new roof, obviously, and a few little leaky spots — nothing bad,” she said.

One house down, Brad Busse said he stood near his front door and watched the storm during his lunch break. As conditions worsened, he, his wife, Jessica, and their 16-month-old son, Brandon, took shelter in a center room.

“It came to a point where I heard all this noise like a train coming,” he said. “I said it wasn’t safe and decided to take shelter.”

The home suffered minimal damage, with six holes on the roof in the rear area, Busse said. He said they are lucky things weren’t any worse.

The tornado marks yet another disaster young Brandon has endured, including Hurricanes Laura and Delta, the February winter storm and the May flooding.

“It’s another disaster to go through, so keep throwing them at us (and) we’ll take them and get through them,” he said.

The severe weather also led to the early dismissals of Vincent Settlement Elementary and LaGrange High schools due to power outages.

Entergy said at the peak of the severe weather, more than 700 homes were without power.

Jones said now that the storms have passed, daytime temperatures will drop to the low 70s through Halloween with evening temperatures in the upper 40s.

Gov. John Bel Edwards will be in Lake Charles today, Oct. 28, to see the damage.

Gov. John Bel Edwards will be in Lake Charles today to see the damaged areas.