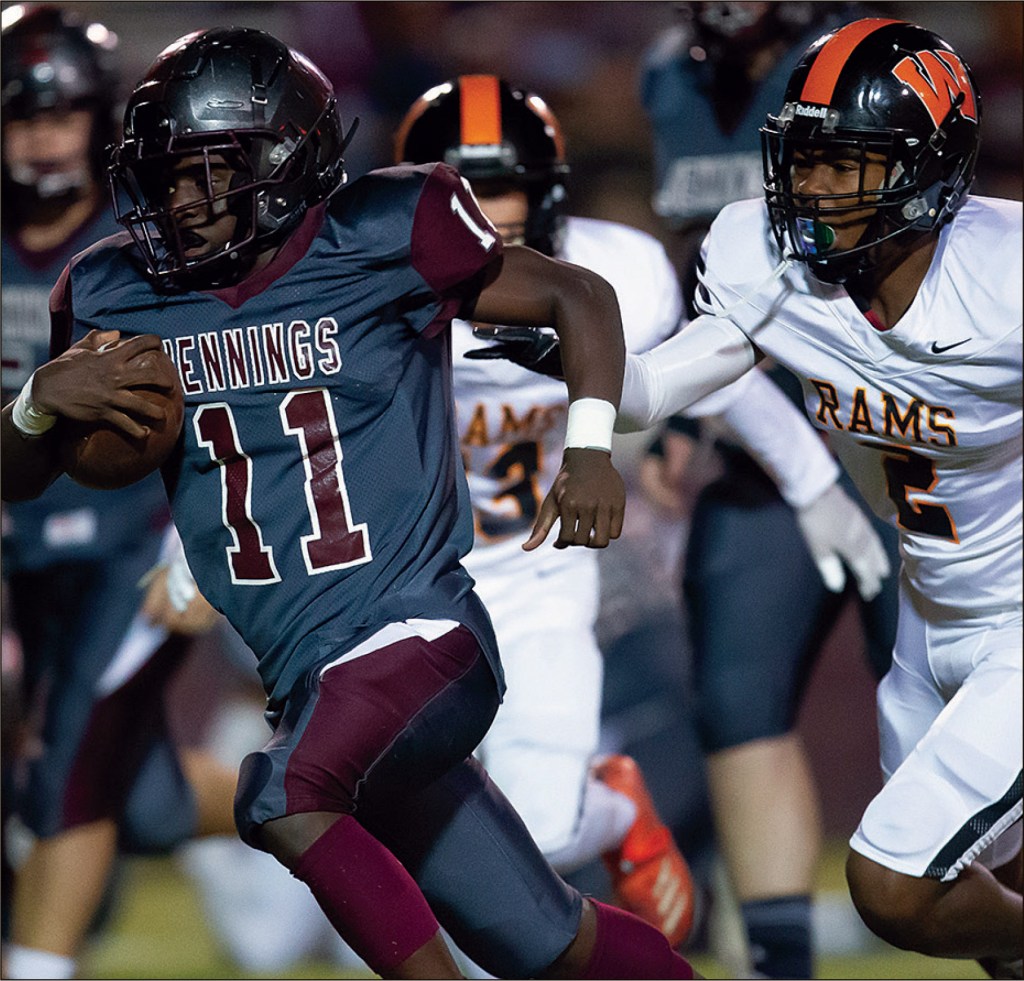 The Bulldogs’ Jarmaric McZeal Westlake’s breaks away from Westlake’s Kristian Ozane for a gain Friday night in Jennings. McZeal ran for 115 yards and a touchdown on 22 carries. (Rick Hickman / American Press)

By Damian Juneau
Special to The American Press

JENNINGS — Jennings broke open a tied game at halftime and used Trevor Etienne’s six-touchdown night to lead the Bulldogs to a 55-42 District 4-3A win over the Westlake Rams Friday night.

The teams went back and forth the first half, but Etienne scored four rushing touchdowns in the second half and threw for one. He scored on runs of 66, 64, 8, 64 and 2 yards as he finished with 240 yards on 14 carries. He went 6-for-7 passing for 197 yards.

“I’m so happy for these seniors of this game tonight as it has been up and down for us,” said Jennings head coach Rusty Phelps. “We have been playing hard all year long and our guys stepped up. I thought out coaches got them ready to play tonight. Trevor really stepped up tonight and made some big plays for us.”

Westlake (7-3, 2-3) wasted little time getting points on the board first on the opening drive. Ethan Koonce’s 1-yard TD run on fourth down gave the Rams a 7-0 lead. Jennings (4-6, 3-2) answered on the next drive which took it three plays to score. Jarmaric McZeal scored on a 32-yard run.

Later, Westlake gained possession on the Jennings 8-yard line giving it excellent field position. Jamaal Guillory threw a 12-yard pass to Tristan Goodly to give the Rams a 14-7 lead.

The Rams extended their lead to 21-7 on another Guillory-to-Goodly 67-yard touchdown score with 6:46 to play in the second quarter.

The Bulldogs answered with a couple of late scores in the second quarter to tie the score at 21-21 at halftime. Etienne scored on a 66-yard fake punt for the first score. The second score came after the Bulldogs gained possession on the Rams 37-yard line after being unsuccessful on the fourth-down conversion. ReJohn scored on a 16-yard run followed by a successful 2-point conversion to tie the score with 1:01 to play in the second quarter.

The teams combined for six touchdowns in the third quarter. The score was tied at 35 with 8:37 left in the quarter when Jennings took the lead for good with back-to-back scores by Etienne to give Jennings a 49-35 lead with 32 seconds left in the quarter.

Westlake cut the deficit to 49-42 when Jupiter scored on a 3-yard run with 9:50 to play in the game. Jennings scored its final touchdown with 5:56 to play and forced Westlake to turn the ball over on downs with 3:43 left.

The Rams finished with 259 rushing yards and 162 passing. Guillory finished 9-for-15 and two touchdowns. He rushed for 104 yards. Goodley led the Rams with six receptions for 139 yards.

“Trevor Etienne is a good player, and they have a good team as they played well tonight,” said Westlake head coach John Richardson. “We made some mistakes and anytime they have a player like that on other side they will make you pay for it. We can’t have mistakes like that and give up those kinds of points against them and we did. Sometimes we keyed so much on him and left everything else open.

“Hats off to them and they needed to win, and they played better than us tonight.”