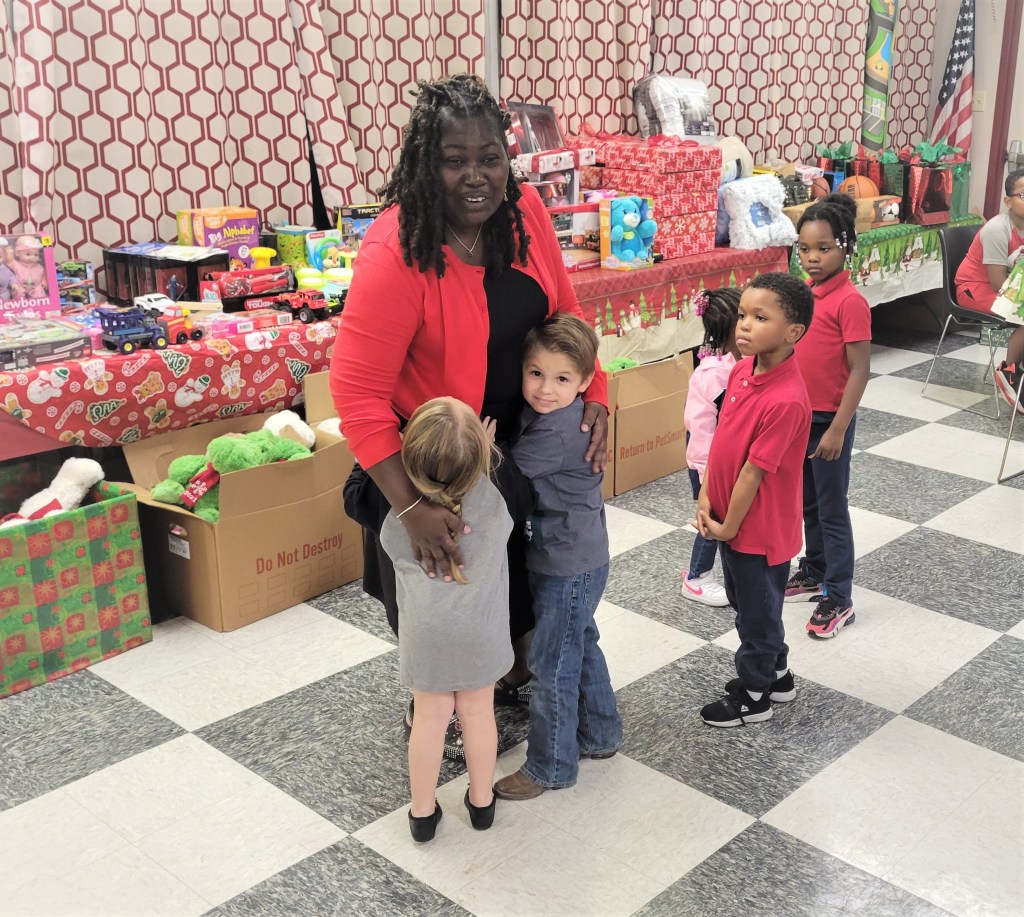 Cynthia Beverly’s efforts to line up children for a game at the Destiny Driven Youth Christmas party are unsuccessful, but few people would pass up the opportunity for a hug. (Rita LeBleu / Southwest Daily News)

When a community cares, especially about its seniors and children, the spirit of giving prevails. Destiny Driven Youth is an organization for youth ages 10 to 20, and the purpose of the organization is to remind these youth that “God has a purpose for their lives,” said organizer Cynthia Beverly.

The group celebrated the reason for the season Thursday with a little help from volunteers such as Michael Zeno, sweating as he finished up the gumbo in a kitchen where the temp was probably 80 degrees.

The event included giving each senior who attended, at the invitation of Destiny Driven Youth, tickets to exchange for toys to give their grandchildren after the meal and games.

One of the grandchildren, and his grandmother, were in for a big surprise. Bernadine Fernandez attends events at the senior center where Beverly works as a coordinator and where Tommy Little volunteers. She asked Little, who has a truck, if he could go to local pawn shops to find a bicycle for her 13-year-old grandson whom she has adopted.

“He needs it for transportation, including to get to church,” she explained. “I don’t have enough for a new one, but I can probably afford one from the pawnshops if someone can get it and deliver it for me.”

“I hear stories like this all the time,” said Little. “It can break your heart, but at the same time, it seems like God always provides. He always opens a door. I find out about a need and boom, one of our local industries and businesses that volunteer and help the senior center generally provides it. Isn’t God amazing?”

Little wasted no time in heading to buy the grandson a new bike. When volunteer Nanette Vincent realized what he was doing, she asked to chip in. When Vincent’s friends found out about the bike, they asked if they could chip in.

During the Destiny Driven Youth Christmas party, Tommy Little asked if there was anyone in the audience who had ever worked for the American Press because he heard Santa had a bike for her for Christmas. Fernandez stood up.

The 78-year-old had a route and then worked in distribution before retiring. Tears streamed down her face. She had no idea about the presentation.

Beverly said after the event she got a letter from someone who attended who told her that a couple of children who received gifts at the event would not have gotten anything from their grandmother if not for the Destiny Driven Youth presents.

“I really didn’t want the party to be about the presents,” Beverly said, “but I do feel blessed knowing that we’re making a difference.”

Promise of a new look for park, Sam Houston…