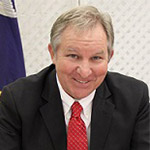 The Westlake City Council approved the appointment of Kenny Brown as mayor pro tem at the monthly meeting on Monday, Feb. 21.

After the death of Mayor Bob Hardey, Dan Racca moved from his position as Mayor Pro Tem and council member to Interim Mayor of Westlake. Della Houfpauir replaced Racca as council member.

Chief Jonathan Duff announced he is taking applications for a firefighter to fill out his crew.

The primary discussion at the brief meeting was drainage projects planned for the National Golf Club of Louisiana, which in turn may impact a few nearby West Trace property owners in two ways. Poorly drained areas near these residents’ properties could be improved by these projects and/or the cost to improve drainage might be passed along to property owners who want to purchase adjoining property and expand their property lines into these areas that are being rectified.

Byron Racca, an engineering consultant for Meyer & Associates, said one of the areas has been topographically surveyed to determine low spots. A swell ditch would be created to tie in with a catch basin. Tributary swells from the property of homeowners will drain better.

After a resident asked about the scope of the work, it was determined this would not solve the drainage problem near her home. It was decided a review of the property in question and estimate for a drainage project in this area would be sought.

Vernon Meyer with Meyer & Associates announced that the Myrtle Springs improvements, a DOTD project, will begin after John Stine improvements are complete.

“This project has been scheduled for 2023 to 2026, and we’re proceeding with the necessary submissions to the Metropolitan Planning Commission,” Meyer said.

Meyer said the Garfield Drainage design is on hold for future funding and the sanitary sewer equalization system has been funded $2.5 million by the state.

This requires a 25 percent match from the city.

Architect Barry King reported on warrantied compressors that went out last week at the new clubhouse. At the time of the meeting, what caused the problem had not been determined but troubleshooting had begun.