Broncos’ Dibbley does it all, throws one-hitter, hits winning HR 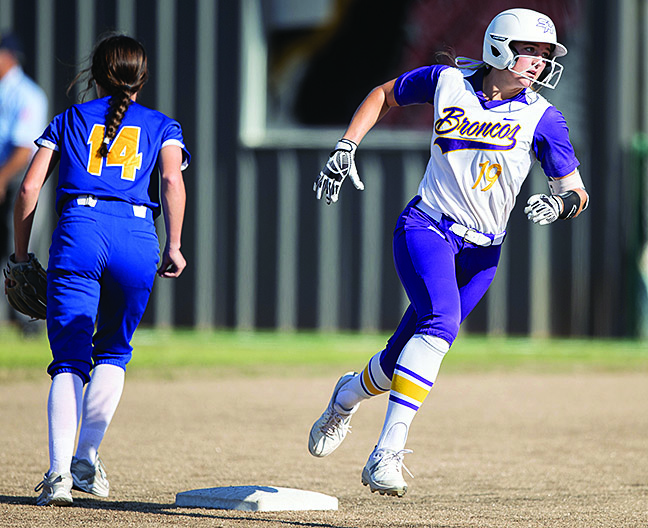 The Broncos’ Lexi Dibbley rounds second base on her way to a triple against Sulphur Thursday at Sam Houston High School in Moss Bluff. Dibbley, who threw a one-hit shutout, ended the four-inning game with a three-run home run. (Kirk Meche / Special to the American Press)

MOSS BLUFF — Lexi Dibbley pulled double duty for the Sam Houston Broncos, holding District 3-5A rival Sulphur to one hit and ending the game with a three-run home run to left field in a 15-0, four-inning Broncos win.

Sam Houston (18-6, 3-0) extended its winning streak to seven games and continued to crush the ball. The Broncos have scored 94 run during the winning streak.

Dibbley pitched a complete game and struck out three in her longest outing of the season. An injury prohibited Dibbley from pitching until last week. Sam Houston is undefeated in her three appearances in the circle.

“We’re still taking it slow and steady with her, but she looked good today and more importantly is feeling good,” Broncos head coach Beth Domingue said.

Five Broncos had multiple hits. Aubrey Hobbs hit a solo homer in the second inning to start the scoring, with Bylie Fontenot walking with the bases loaded to score a run and Maddie England driving in a third with a fielder’s choice.

The Broncos broke the game open with seven runs in the third inning, highlighted by a three-run homer by Brylie Fontenot and two-run single by Hailey Mire, who finished with three hits and three runs scored. Jolie Dore had two hits and an RBI, Fontenot added two hits and two runs and Hobbs was 2-for-3 with two runs. Dibbley walked, tripled and homered in four plate appearances.

“We have a lot of depth in the lineup,” Domingue said. “Even if the top of the order is struggling, we have others that will step up. It changes every day. We have some young ones in there, but they are doing well.”

Domingue said her team showed toughness even when Dibbley, an all-state selection last year, was unable to pitch.

“They know how to fight,” she said. “We have been in some high-scoring games where we fell behind, but they fought to come back, even in the losses. They didn’t just lie down and take the loss, they fought to win, and I like that about them.”