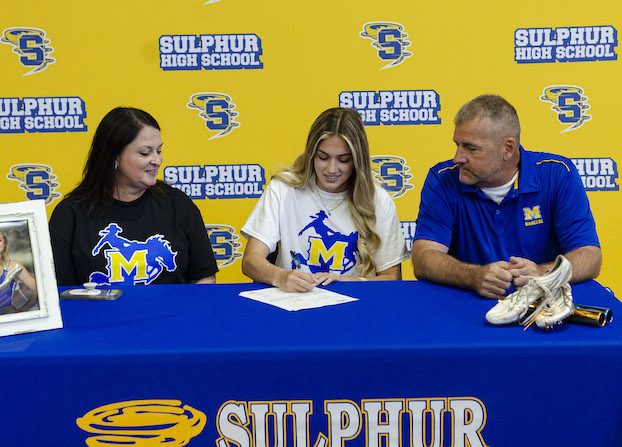 Sulphur High School senior Bridget Trahan will follow in her father’s footsteps as a McNeese State athlete this fall.

Trahan signed a national letter of intent Thursday to run track for the Cowgirls.

“It feels amazing to follow in his footsteps,” Trahan said. “He has always loved hurdling and it has been a big part of my life, him teaching me how to hurdle and being there every step of the way. They have a great support system and amazing coaches. I am looking forward to head there and run at the next level.”

She set the school record of 14.77 seconds in the 100-meter hurdles on Mar. 17 at the Sam Houston Broncos Relays.

Trahan’s father, Don, was a two sport athlete at Sulphur. He played football at McNeese in the late 1980s.

“It was a big goal this year to break 15 seconds and I am coming off an ankle injury from volleyball,” Trahan said. “It was a big challenge. Overall, it has been pretty great. As a freshman, I had a hard time because I was not as strong as I am now. So I was running 20s and 18s, then I got down to 16 and it has just been going down from there.”

Trahan is ranked sixth in the state in 100 hurdles this season.

“Her work ethic is there, and her leadership is second to none,” Sulphur track coach Joe Judge said. “She is a pure leader.”