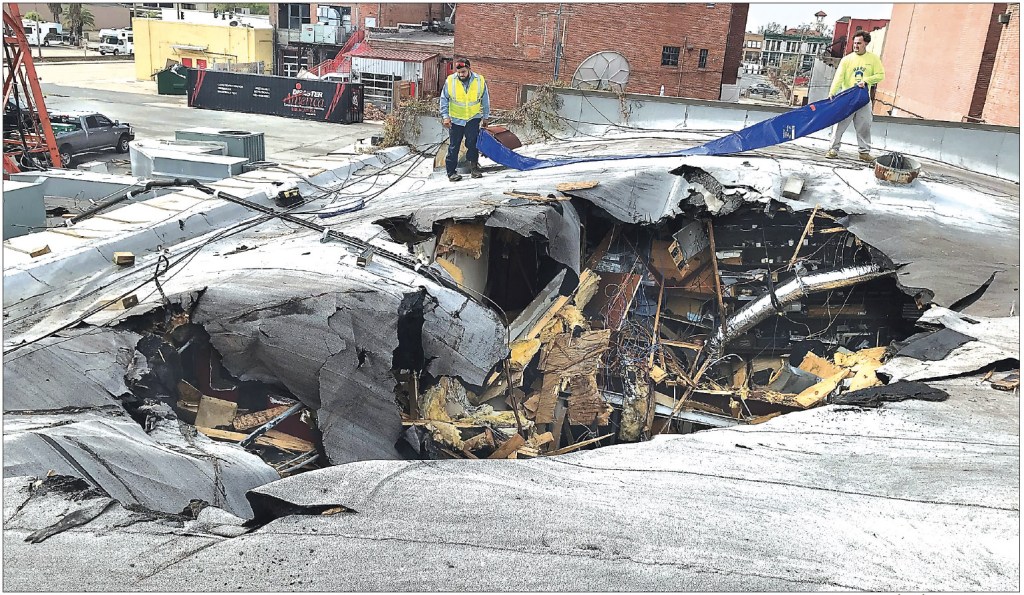 Workers attempt to put a tarp over a hole in the TV station’s roof after Hurricane Laura in 2020. Despite the major damage the building sustained, the station plans to rebuild and stay in the same downtown location. (Special to the American Press)

KPLC officially announced their plans to continue operating out of downtown Lake Charles.

“This is the only home that KPLC has ever had,” stated John Ware, KPLC-TV Vice President and General Manager. “Our big orange and white tower stood over us for 65 years, until Hurricane Laura dropped most of it through the roof of this building.”

Ware explained that the hurricane caused damages to multiple vital components of the newsroom. Due to these damages, Gray Television and the KPLC team have spent the last two years deciding how to move forward.

“It’s been our privilege to be in the hub of the hub city of Southwest Louisiana,” he said. “It’s been very convenient for us to be here in downtown as an operating base to go throughout the community we serve.”

Gray Television will be making an investment in the downtown location. “It’s not without its challenges, but we know we have a great team of folks ready to take on those challenges.”

“In the days after Hurricane Laura, there were some moments where KPLC and Gray Television were having to make some very difficult decisions,” stated Hunter. “We got to a point today where there was a group commitment to come back and reinvest in what has been a historic location and a very important anchor for downtown Lake Charles.”

The architectural rendition was revealed by Hunter and District A Representative Ronnie Harvey.

“We think it will be a great facelift for the area,” said Ware. “We worked with the city to make sure it reflects the architectural significance of the area.”

He continued by explaining that the team wanted the building to reflect the heritage of Lake Charles.

The new KPLC building will have expanded television production facilities. There will be two new studios, more parking, and a larger shared resources agreement space for KVHP.

Construction will be spearheaded by local company Pat Williams Construction.

“I couldn’t be more proud to be selected to be over this beautiful building,” said Jason Williams, president of Pat Williams Construction. “There’s been a lot of teamwork, a lot of effort, and a lot of man hours put in on behalf of KPLC, the design team, the construction team, and many others.”

Williams explained that after experiencing the community-wide damages of Hurricane Laura first-hand, both he and Pat Williams Construction made a commitment to heal Lake Charles. “This project is precious to me, because it’s a big step in rebuilding this community.”

KPLC will continue to operate out of their current facilities while construction is underway. Construction is scheduled to begin in the first half of August. Weather permitting, the construction should be completed in 18 months.

Pat Williams Construction Vice President of Construction Jared Cavys explained that the construction will be conducted in phases. The contractors have to ensure they are able to keep KPLC’s tech core operational.

“We will have some temporary closures on Division Street during the demo phase and the steel erection,” said Cavys. “… No more than a couple days, and we will be coordinating with the city to minimize disruption.”