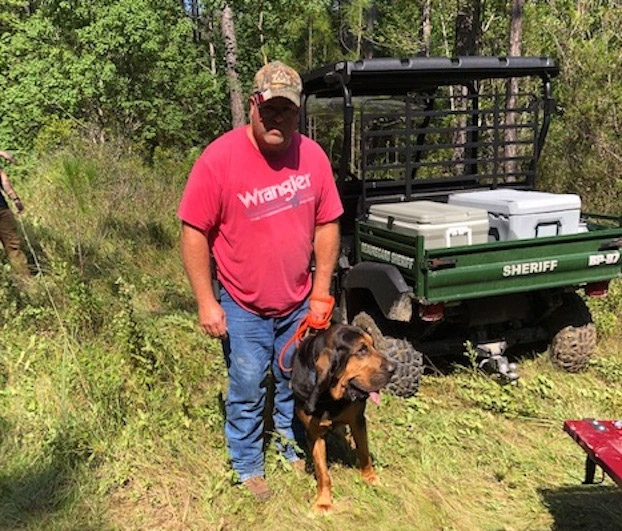 Bo the Bloodhound, with his owner and trainer Tony Arnold, is being called a hero after successfully finding a DeQuincy man who had been missing for five days in a thickly wooded area near the Oretta Cemetery. (Special to the American Press)

A missing DeQuincy man was found alive Tuesday morning in a densely wooded area less than a mile from where his car had been found abandoned Monday evening, authorities said.

Eddie Charles Thompson, 76, was found coherent, but dehydrated after having been missing since Friday. Authorities said immediately following an emotional reunion with his loved ones, Thompson was transported to a local hospital for medical attention.

“It was a very happy reunion, as you can imagine. I’ve known Eddie my whole life and the amount of relief I felt finding him was incredible. On behalf of the DeQuincy Police Department, I want to thank all the agencies and civilians who helped in this search,” Major Jerry Bell said.

The search for Thompson began on Saturday when a silver alert was issued by Louisiana State Police after family members reported Thompson had last been seen on Friday. Authorities said Thompson suffers from dementia, which may have impaired his judgment.

On Monday evening, Thompson’s vehicle was found by kids riding four-wheelers on an old logging road near the Oretta Cemetery. Bell said the vehicle had become bogged down on the muddy road.

The search for Thompson included deputies from the Beauregard and Calcasieu sheriff’s offices, and also helicopters provided by Louisiana State Police, but it was a four-legged scent hound that Bell said was truly the hero of the day.

As deputies searched through the thickly wooded area on foot, Bo the Bloodhound caught a scent and led the way first to a baseball cap and then, just a short distance away, to Thompson laying on the ground under a tree.

“It was an incredible feeling in that moment. Bo’s whole demeanor changed and he knew he had done good,” Bo’s owner and handler, Tony Arnold, told the American Press.

Bo was authorized to join the search on Monday through an agreement Arnold has with the Beauregard Parish Sheriff’s Office. Arnold, who lives in Rosepine, said he learned recently there was a need for scent hounds in the local area to assist with finding lost people and he wanted to help.

“Helping locate lost children or adults with special needs has been a mission close to my heart for years and  I was very happy to be able to bring a happy ending in this case,” Arnold said.

Finding Thompson marked Bo’s first official “find,” though Arnold said the 2-year-old hound has assisted in other searches in Beauregard Parish over the past six months.