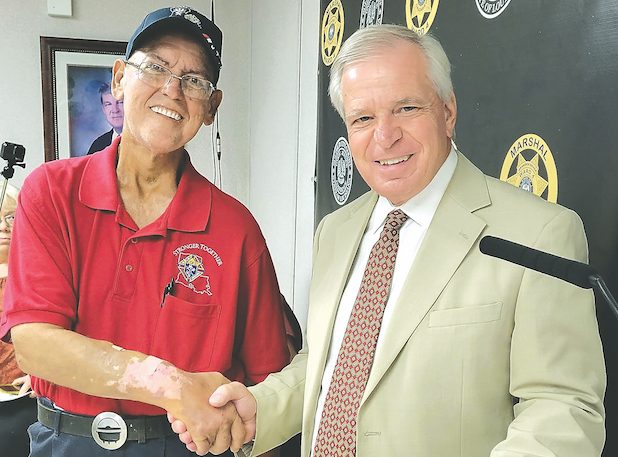 “In every community across the United States, you can find those who care enough about their city that they feel compelled to thrust themselves into the democratic process,” Danahay said. “This person does not do it for his own gain but instead works for the betterment of the community by becoming involved in issues that affect all citizens. Randy Hebert makes the City of Sulphur a better place to live.”

Danahay noted that Hebert knows how to present his voice in government, a voice that all citizens have, in a peaceful and dignified fashion.

“Before presenting himself on an issue, this person has made every effort to educate themselves on the issue, to research the item and seek out experts from both sides of the issue. In this work, this individual is able to make educated, logical and sensible reasons to support or not to support an issue,” Danahay said. “As a community activist, they reflect the checks and balances that we are fortunate to have in our form of  government.”

Hebert said his activism started early and credits some of his recent work to  Leland LeBorde for allowing him to participate in the Sulphur Carlyss Information Station social media page.

“I was five years old when I handed out pushcards for my Uncle Bevian Hebert,” he said.

Exercising his right to be engaged in the democratic process was instilled in him by his parents. His mother, Jacqueline Saunier Hebert created a newsletter with her word processor. His sister illustrated. His mother and his father, Carl Hebert attended political events and took part in straw polls. His father listened to one radio show while taping others to stay informed.

“My parents never told me who to vote for and why to vote,” Hebert said. “They trusted me to make the right decision.”

Hebert said many people have contacted him over the last 20 years to find out about political candidates.

His advice to others who want to become involved is, “Ask questions. It doesn’t matter if they’re wright or wrong, silly or stupid or whatever. Questions show you’ve been paying attention and you need clarification.”

“Leland makes some outlandish comments on his social media page to stir things up and every comment allows the group to move up in status,” Hebert explained. “He started the page to get information out there. I go back and debunk some of the comments. He’s really doing a good service for the community and he doesn’t get the credit for it he deserves.”