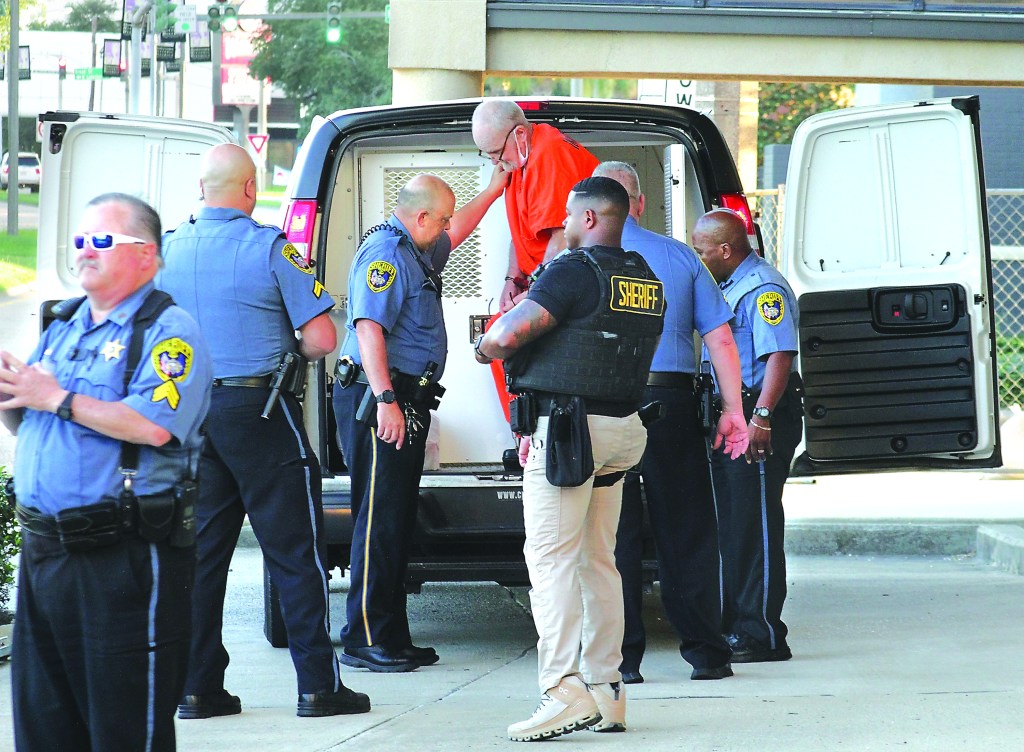 Calcasieu sheriff’s deputies help Daigle out of the back of a van when he arrives. (Donna Price / American Press)

After one hour of deliberations, the jurors in the penalty phase of Kevin Daigle’s first-degree murder conviction unanimously agreed Tuesday night to a death penalty sentence.

Daigle was convicted in 2019 of fatally shooting Louisiana State Police Trooper Steven Vincent in the face when the officer tried to help him on the side of the road on Aug. 23, 2015.

A unanimous jury gave Daigle the death penalty for Vincent’s murder four days after his conviction, but the state and defense worked out an agreement in which the guilty verdict would stand but the penalty phase would be redone because of allegations a juror wasn’t qualified to serve.

“I’d like to thank the jurors for delivering what I thought was justice,” Calcasieu Parish District Attorney Stephen Dwight said after the verdict was read. “They listened to the evidence and they came back with the death penalty, which I think is the appropriate response to the circumstances.”

Daigle is “an animal,” Dwight said.

“The impact that he had upon the family was gargantuan in size and when those victims testified about the effects that they felt, it was palpable,” Hall said. “Everyone in the courtroom understood that loss.”

Hall said it is very obvious Daigle was acting with a specific intent the day of the shooting and was in full control of his faculties.

“It’s very well known that he was intoxicated and we never shied away from that,” Hall said. “But as a lifelong alcoholic, he operated within that realm very deliberately just like he did day in and day out. The cruelty that he exhibited toward Trooper Vincent, in my opinion, is unmatched as far as what I’ve seen in my career.”

Hall said Daigle matched Vincent’s kindness to him with the worst thing possible.

“Steven Vincent was a shining beacon to us all,” Hall said. “He led by example. He was an example to his family, to his son, and to all of us collectively on this team and just hearing about him inspired me and I know that the world would be a better place if we could all follow his example.”

Judge Clayton Davis has set a post-trial motions deadline of Sept. 6 for the defense. Sentencing will be held on Sept. 7.

Earlier in the day, jurors heard the testimonies from two expert witnesses introduced by the defense.

John Fabian, a psychologist who specializes in criminal and civil forensic psychological and neuropsychological evaluations, told jurors that Daigle “is a damaged person.”

Fabian, who said he met with Daigle three times beginning in January of 2017, said Daigle has the dual diagnosis of chemical dependency as well as mental illness. He said medical records document that Daigle has suffered from depression since 1998, and among those records are files for multiple hospital stays for suicidal behavior beginning in 2005.

Daigle “tries to numb his physical and emotional pain,” Fabian testified. “He’s not exaggerating or faking his mental illness.”

Fabian said Daigle has had concussions due to multiple vehicle crashes, was a chronic drinker, suffers from chronic obstructive pulmonary disease (COPD) from years of smoking, has abused multiple drugs and had a mini stroke at some point during his adult life.

Fabian said he believes Daigle was impaired during the time of Vincent’s shooting from both drug and alcohol use coupled with his mental illness.

When cross-examined by Calcasieu Parish First Assistant District Attorney Jacob Johnson, Fabian said he would agree that information Daigle gave medical personnel when applying for disability and Social Security benefits in 2005 were “to benefit Daigle” and that Daigle has lied about the type of substances he abused in medical documents.

He said he would also agree with Johnson that if Daigle claims to have been suicidal the day he shot Vincent, it would have been easier for him to kill himself rather than “cock his gun and aim it at a person who was running away from him.”

“He is not a psychopath,” Fabian said. “He has anti-social traits but I do not believe he has an anti-social disorder.”

Dr. Melissa Piasecki, a forensic psychiatrist, testified she met with Daigle in April of 2019 and has determined Daigle’s substance abuse did impact his mental state.

Piasecki said two hours after Daigle’s arrest, when toxicology tests were performed, his blood alcohol level was at the equivalent of drinking 15-18 alcoholic drinks. At the time of his arrest two hours earlier, it would have been higher, she told jurors.

Alcohol “gets in the way” of judgment and insight, Piasecki said.

She testified Daigle was in active alcoholic intoxication at the time of the shooting while going through detoxification for earlier substance use.

Piasecki said pain medication prescribed to Daigle for arthritis, a curved spine and his ankle “only exasperated” his substance abuse disorder.

“He’s trying to make sense of what happened during the shooting without having a full memory of the event,” Piasecki said.

When cross-examined by Johnson, Piasecki admitted Daigle was cognizant enough to hide a bright green gun in his lap, blame someone else for driving the vehicle and shoot at the trooper.

Piasecki said Daigle has memory gaps and he tends to fill in holes with information about the attack he has received throughout the years. “Or he could be lying,” Johnson said. “It’s possible,” Piasecki answered.

Dr. Chad Domangue challenged the findings of Fabian, Piasecki and Jeffrey Lewine — a neuroscientist who testified on Monday — when prosecutors called him to the stand as a rebuttal witness.

Domangue said he saw nothing in Daigle’s medical records to prove he has brain damage due to a mini stroke. He said the white matter abnormalities Lewine said Daigle has in his brain would not cause him to become a killer.

“Most multiple sclerosis patients have white matter abnormalities. Does that make them potential killers? Of course not,” Domangue said.