Sam Houston Jones State Park back up and running 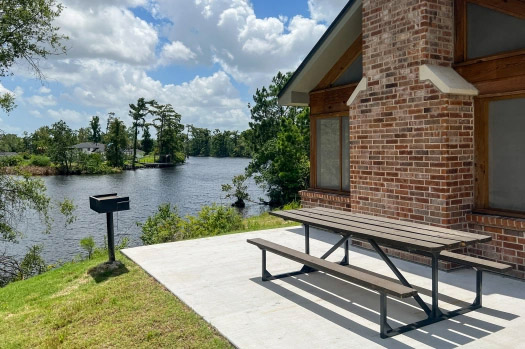 After 20 months of hurricane recovery, repairs and renovations, Sam Houston Jones State Park officially reopened Wednesday with a ceremonial cutting of the ribbon. Lt. Gov. Billy Nungesser was honored with this task.

These renovations are “a milestone for the park,” Nungesser said. “It brings revenue in, but it also signifies the next step in recovery for the region.”

For Nungesser, celebrations like this give locals hope that change and recovery is just around the bend. “Hopefully, this is a bright light in more things to come, not just for this park but to this region of the state.”

He credited much of the success to local officials. State Sen. Jeremy Stine and Reps. Brett Geymann and Troy Romero were present for the ceremony.

“This is an important event for me, personally, the Moss Bluff community, and the Westlake community,” Geymann said. “This is the cornerstone of what we build our communities around. I’m so thankful that we’ve got this back running up today.”

Romero is just as grateful.

Initially, the closure of Sam Houston State Park was considered. “When I took office, I was told we’d have to close seven state parks,” Nungesser said. “That wasn’t an option. We not only kept them open, but today seven state parks are actually making money for us.

“I believe we’ll see a day where every one of our parks is generating millions of dollars for culture, recreation and tourism.”

There was plenty of work to be done after the destruction from Hurricanes Laura and Delta.

“When we got here, there was a tree, or some type of limb, that we had to cut and remove every 4 feet across the entire road,” said Brandon Burris, director of Louisiana State Parks. “We lost roughly 90 percent of our timber here after Hurricane Laura went through.”

According to Burris, the park had more than 60 insurance and FEMA claims, totaling about $22 million.

The government officials in attendance were eager to thank local volunteers, business and traveling recovery crews for the immense amount of work and support that was needed to restore Sam Houston State Park.

“We’ve been very fortunate to have some of these refineries and plants pitch in to help,” Nungesser said.

Burris recounted the immense amount of work that was done in the first nine months of recovery.

“After the storm, we had difficulty finding contractors to come in,” he said. “The crew lived here for nine months … these guys literally worked from sun up to sun down every single day.”

The following people, organizations and businesses were presented with certificates to recognize their donations of time and funding to aid in restoring the park: The Nature Conservancy of Louisiana, Citgo Lake Charles, Entergy of Louisiana, Friends of Sam Houston Jones State Park, Phillips 66, Calcasieu Area Council of the Boy Scouts of America, Moss Bluff Civic Club, Sasol and State Parks Travel Teams.

The park also features a 31-site campground for RVs. These pull-through campgrounds have complete sewer systems and 50-amp electric hookups.

The Office of State Parks was able to install over 500 feet of boardwalk along the river, and restore the lagoon.

Reservations can be made at reservelastateparks.com.