Debate continues on whether to record Sulphur Council meetings 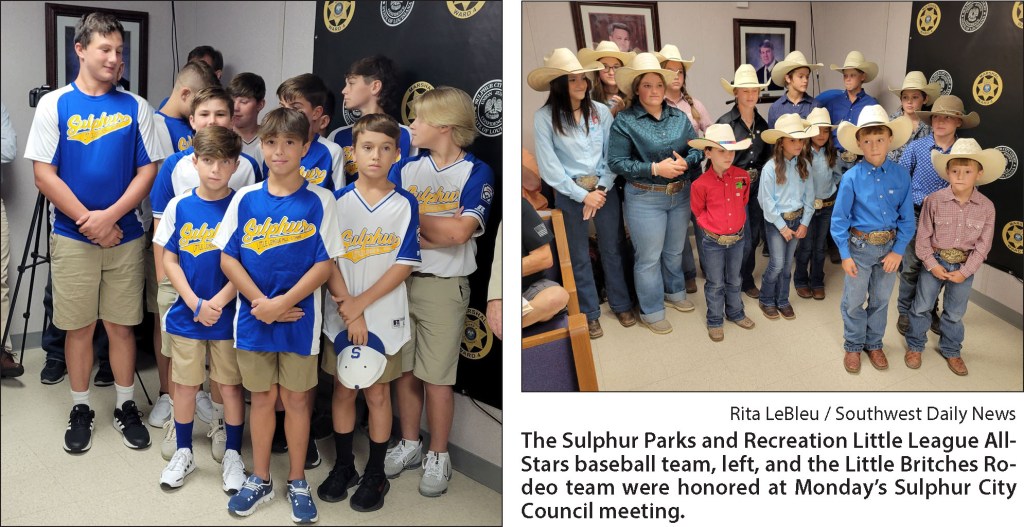 “They were very polite, very good sports and the coaches were as good a sport as they could be because there were several things that were questionable and Mr. Little, he handled those very well,” Ellender said.

In his proclamation, Mayor Mike Danahay noted the team’s participation included “developing a feeling of fair play and community spirit as well as respect for the discipline of rules and decisions.”

“We’re looking at you as the future hope  to bring the state high school association rodeo back to Sulphur,” Abshire said. “It was here so long, a tradition filled with parades and people from all over our state. I’m looking at you and I think we’ve got a good promise in front of us.”

Nic Nezat’s motion for the resolution to adopt a member to the land use commission for District 2, and for the Request for Proposals (RFP) for the videoing of city council meetings did not go forward. The RFP was just to get an idea of the cost of the service, not a motion that would decide whether or not meetings would be recorded.

Nezat said he made the motion about the commissioner because on the night’s agenda was a public hearing of the ordinance to amend the term of the Land Use and Planning Commissioner. The second election between Mike Koonce and Nezat allowed Koonce to keep his seat until the month after Nezat was elected. During that interval Koonce appointed his pick. Now, Nezat is allowed to make his appointment. With the amended ordinance this situation won’t occur again. The appointed commissioner’s term will start and end when the council person’s term starts and ends.

“It seemed to be rushed,” Melinda Hardy said in response to the motion.

Nezat offered to summarize the council history that led to his motion and told council members that he sent out an email the previous week about the motion. No one acknowledged receiving the email.

When discussion turned to videoing the meetings, Abshire gave a look to a resident using her phone to record the meeting.

“I just want to say, and make sure you get this recorded.”

“I’m here to serve. I want to serve,” she said. “I answer to a higher power. I want you to know. Those are the responses I have received, I can’t tell you about other council members. That’s what I have received.”

“I didn’t get any emails or phone calls, but I think that’s because everybody knows my stance. I am 100 percent for recording,” Nezat said.

Hardy said no one called or emailed her. She talked about how the word transparency has been used in council discussions about videoing the meetings and posed the question that if allowing video recording determines transparency, then why don’t other surrounding municipalities video their meetings.

“It has been brought to my attention that you all reached out through Facebook and posted our addresses, phone numbers and emails, which is public information on the website. I did take offense to my name and my picture and my personal address on Facebook because I didn’t post it there but you felt it was your prerogative to put my information on Facebook. I took offense to that. You did it but there were no results on behalf of you asking them to contact me. So, that’s my comment.”

Sulphur resident Jared Hewitt spoke at the July meeting about his concerns about the safety of passengers traveling Maplewood Drive near the construction area. He reiterated his request that something be done before someone gets hurt even though the city’s engineering consultant said the construction crew is responsible for safety and liable in case of an accident.

Ordinance Enforcement Officer Shelley VanderHey answered questions about the nine properties slated for condemnation so demolition could begin, resulting in additional time for some of the property owners to work on securing, cleaning up or repairing and cleaning up those properties.