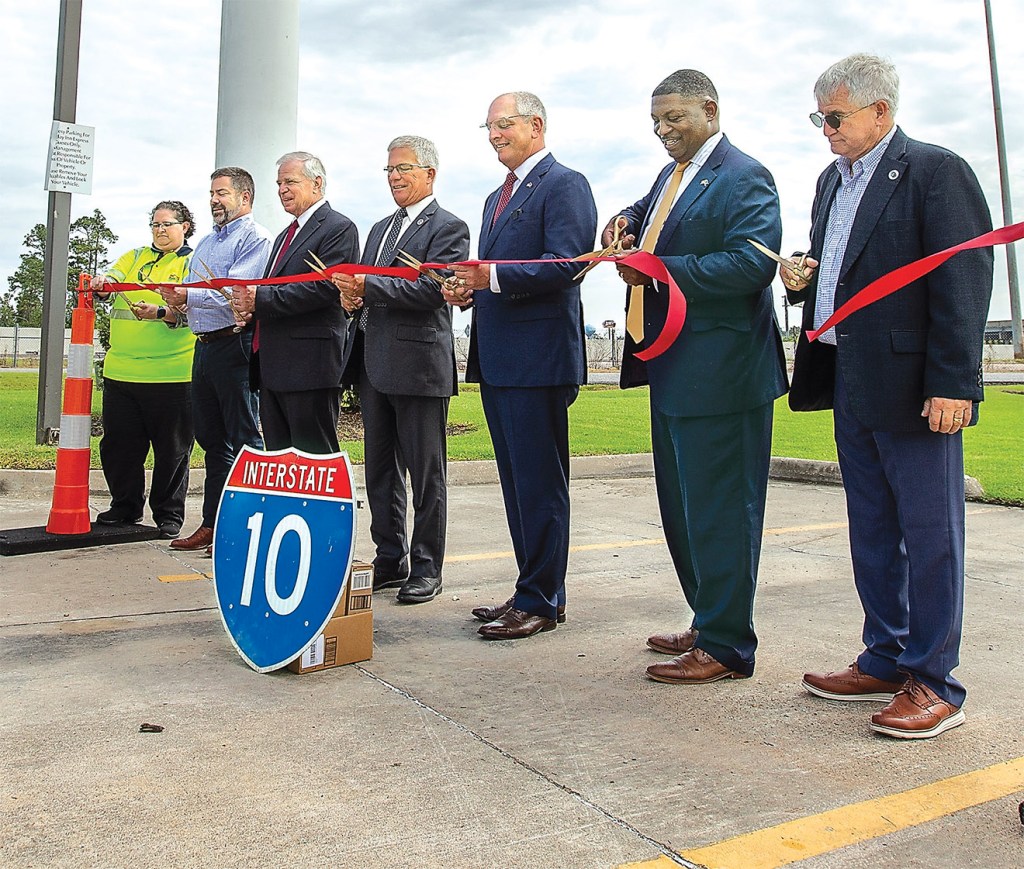 Gov. John Bel Edwards, fifth from left, joins other officials in a ribbon cutting at Holiday Inn in Sulphur Friday to mark the completion of the 1-10 widening project. (Rick Hickman / American Press)

Edwards said the widening and improvement of the stretch of road between Interstate 210 and La. 108 was considered “substantially complete” in July. The project widened the stretch of interstate from three lanes to four lanes. The 10 Maple Fork bridges were also worked on. The bridges were reconstructed and elevated, putting them above the 100-year floodplain.

Edwards said the improvements will add resiliency to the area, “mitigating against the risk of future flooding and so forth with every project that we do.”

Wilson said the project is “one that’s been impacting travelers in this community for some time and we enjoy celebrating the success and seeing the impact of what we’ve built.”

“A lot of the success that you see happening in the state of Louisiana is not just about the people that are doing the work of the private industry to work with,” he said. “It really has been a large part about the leadership that has prioritized infrastructure in a way that we have not seen for a number of years.”

The cost of this project was $45.5 million. Edwards said since the beginning of his administration, he has led the initiation of almost 2,000 road and infrastructure improvements. The cost of these projects has exceeded $5.2 billion.

Calcasieu is the recipient of 87 projects and more than $500 million in infrastructural investments.

This project broke ground in January 2020, only months before what would become some of the most difficult years in Southwest Louisiana.

While the project was originally set to be completed in 2021, Edwards recognized the overcoming of these obstacles.

“We had no idea what was coming over the next couple of years, and yet we did get this project to the finish line,” he stated. “That’s a testament to all of you. We have a very resilient state and I am continually inspired by the goodness and decency of the people of Louisiana, and certainly about the resiliency as well.”

For Edwards, Southwest Louisiana’s ability to complete infrastructure projects in the face of the variety of hardships the area has faced speaks volumes.

“Just during the COVID pandemic that started in March of 2020, we’ve had five hurricanes hit Louisiana and, of course, here in Southwest Louisiana,” he said. “We think about two years ago, Hurricane Laura hit, followed by Delta shortly thereafter, but that was all during the pandemic. The fact that we had infrastructure projects like this, that continue to make progress and now have been delivered. I think it does speak to that resiliency.”

State Rep. Les Farnum said this is “just the tip of the iceberg” of projects across the state of Louisiana.

“This is a phenomenal effort to increase the safety for our residents here in Calcasieu Parish and across the state that traverses the interstate system,” he said. “These are all parts of the pieces of the puzzle that are all coming together that are getting us to a place where we can get to and from our home safely.”

Edward said construction of a new I-10 bridge is on his radar. “That’s the single biggest priority in this area.”

But, it isn’t the only priority.

“We’ve got no shortage of work to do around the state,” he said. “We have a long way to go. But you know, we’ve gotten started and we have actually historic amounts of money in the pipeline for infrastructure”

Sulphur Mayor Mike Danahay expressed his gratitude for these projects, and the safety this will provide for locals.

“I cannot tell you how many times our fire department and police department have been called out on accidents in this area,” he said. “We hope to see that lessen up. We already have seen an improvement in that so we’re really excited about that.”