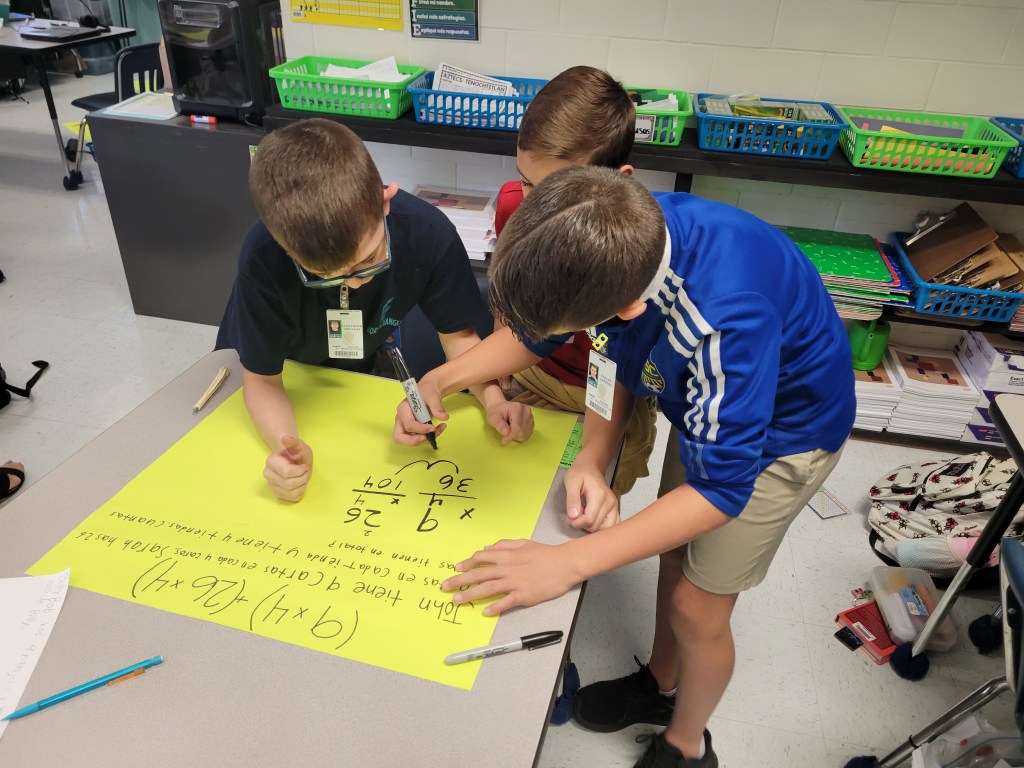 Alex, Kooper and Dallas, and other students in the Spanish immersion program, were assigned a math equation to solve. They have to translate the equation to a math word problem – written in Spanish – and then solve it. (Rita LeBleu / Southwest Daily News)

Less than 300 schools were named a 2022 National Blue Ribbon school by the U.S. Secretary of Education Miguel Cardona. Only seven of those schools were in Louisiana, and Frasch Elementary was among them.

“The award was for closing the achievement gap in our most disenfranchised students,” explained Principal Kristi Russell, students who typically, across the nation, score lower. “Our students had higher growth, and the thing is, they were able to keep that through the pandemic and hurricanes.”

Frasch had a very low mobility rate before the hurricanes, according to Russell.

The application was lengthy and included questions about the school’s Spanish immersion program and use of technology.

“Students learn how to read and write in English and Spanish,” Russell said. “They take all of their math, science and social studies classes in Spanish.

“So, when they complete the program here they go to Lewis (Middle School). They have a program as well. At graduation, they can receive a seal of literacy on their certificate.”

Technology use, like the Spanish immersion program, begins in kindergarten.

“They are able to use technology to make short video clips, communicate with and learn from each other on discussion boards, give peer observations and critique one another’s work or give support to other students,” Russell said.

For children who have had trouble speaking up, or at all, technology has given them a voice.

“So, it felt like a lot of the progress that we made was lost at that point because our babies had been home so long without instruction.”

Frasch’s principal also pointed out that these were children who had been through things that adults hadn’t experienced in their lifetime.

“We were looking at students who were not only struggling educationally but students struggling with homelessness, some of them with PTSD…. We know how we felt as adults,” Russell said. “What was going on in the minds of children who lost their homes, who were living in a world that’s shut down?”

So Frasch dealt with the social and the emotional. Staff lost family members to COVID. Russell lost her mother during that period.

“I think the thing that was so powerful is that we all needed grace, because we were all walking through it together. All of us were experiencing the same thing together for the first time. So, that made us stronger.”

Russell breathed a sigh of relief when the short interview was over and she was able to show off students and teachers in the classroom.

“As honored as I am to receive this award as principal, it means more to me because of this faculty, this staff, these students, this community,” Russell said. “They persevered through an unprecedented time and I have never been more honored or more proud to work with them.

“It was just so hard and we talked about it. We wondered if what we were doing would make a difference. And it did. So, I feel like all the struggle, and all the work that our students put in, that everyone put in really, shows that it was not in vain, that good things do still happen.”