Saints wear down Rams in second half 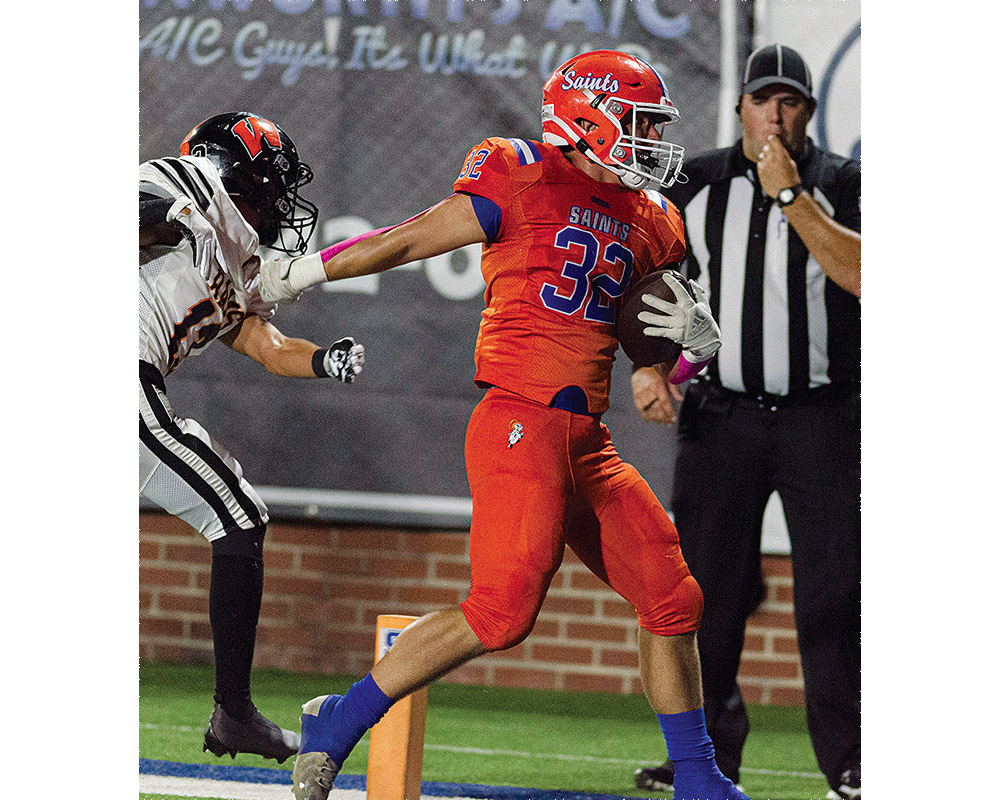 SULPHUR — St. Louis Catholic fell behind twice in the second half but scored 14 unanswered points in the fourth quarter to beat Westlake 42-35 on Friday at Matt Walker Memorial Stadium

“We have been a second-half team all year,” St. Louis head coach Brock Matherne said. “On our stat book, we have outscored opponents the first five games 63-15 in the third quarter.

“We knew what we had going into the second half, and we train that way. We train in the deep end of the pool, we want to drag people there and we want to finish them in the fourth quarter. And we did that today.”

Quarterback James Reina and Graham Montet had big games for the Saints (5-1, 3-0). Montet scored two of his three touchdowns in the fourth quarter and finished with 134 yards on 13 carries. Reina ran for 148 yards and two scores on 28 carries and completed 9 of 15 passes for 71 yards and a touchdown.

“That is two special kids — Montet playing both ways being our Mike linebacker … going into this game with 57 tackles, and James Reina, he is a special kid,” Matherne said.

St. Louis controlled the clock the entire game, holding the ball for nearly 34 minutes and did not have any turnovers.

“We have been bad at that all year, and that was a point of emphasis,” Matherne said. “This is the SEC of districts in Southwest Louisiana.

“We knew we needed to start controlling the ball. We can’t turn the ball over, and we did a good job of that. I am really proud of our coaches. They work so hard. It is a testament to their work and the kids buying into the system.”

“We made a lot of mistakes,” Westlake head coach John Richardson said. “We had a ton of penalties and didn’t line up right.

“We made too many mistakes to win a ballgame. St. Louis did a great job. Their quarterback is a heck of a player. I told them it’s a four-game season. We can lay down and pout or we can come back and fight and try to win one game at a time the rest of the season.”

In the first half, St. Louis controlled the clock, holding the ball for about 19 minutes and scoring on its first three drives before entering halftime tied 21-21.

The Saints went 73 yards in nine plays on their first drive to take a 7-0 lead on a 23-yard run by Reina with 6:29 left in the opening quarter.

Reina added an 8-yard score early in the second quarter, then handed the ball off to Montet almost 3 minutes later for a 10-yard score and a 21-13 lead.

But the Rams used a pair of explosive plays and a short field to keep pace in the first half.

Westlake needed three plays to respond to the Saints’ first score when Dawson raced down the far sideline for a 78-yard touchdown.

Rams senior Tristan Goodly ripped off a 92-yard kickoff return with 10:41 left in the second quarter to cut the Saints’ lead to 14-13.

Westlake recovered a Saints onside kick attempt for a short field, and Kristian Ozane turned it into a 24-yard score to tie the score at 21-21 with 6:46 left before halftime.