Tors turn tables in second half, rally from 21 points down 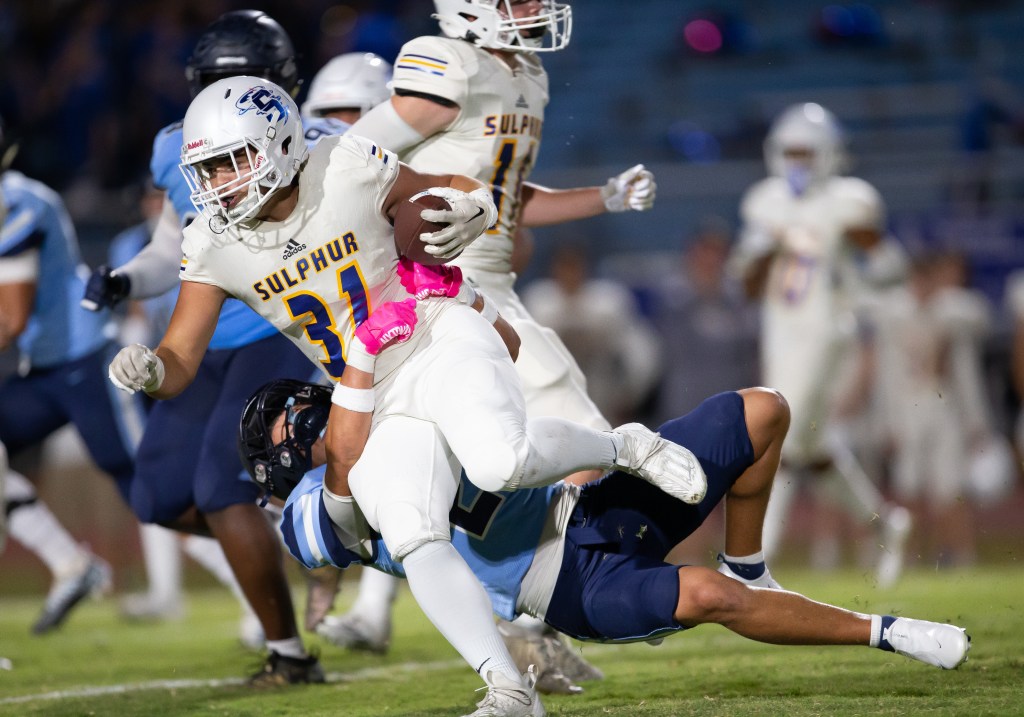 Barbe’s Travis Pradia makes the stop on Sulphur Kayden Sedano during at game at Barbe High School on Friday. Sedano ran for 74 yards and a touchdown on 20 carries. (Rick Hickman/Lake Charles American Press)

The Sulphur Tors overcame a 21-point first-half deficit to come from behind to take a 29-28 win over the Barbe Bucs Friday night in a District 3-5A game.

Sulphur (2-4, 1-4) trailed until the last-quarter comeback. After cutting the Barbe lead to 28-21, Sulphur recovered an onside kick with 6:35 to play. Sulphur drove down the field and converted a fourth-down play with 1:20 to play. Two plays later Gage Trahan scored on a 1-yard run. A successful 2-point conversion pass to Austin Babaz from Trahan proved to be winner.

“We told our guys they win or lose and we don’t,” said Sulphur head coach Chris Towery.

“I told the players the coaches are going to call the plays and put them in a position to be successful. They made plays and those guys came out and earned it in the second half. That was a beautiful job by our football team and by those young men tonight.”

The Bucs were the first team to get on the scoreboard on their opening drive of the game. The drive, which lasted eight plays, was capped by a 4-yard run by Jamaal Levi for a 7-0 lead with 8:30 to play in the first quarter. The Bucs increased the lead to 14-0 early in the second quarter when Carson Sanford scored on a 3-yard run with 11:31 to play.

The Tors had a sustained drive end when they fumbled on a short fourth-down conversion turning the ball over on downs with 4:23 to play in the quarter.

Barbe took advantage, wasting little time increasing the lead. Eric Jones scored on an 8-yard run with 2:13 to play in the quarter.

Sulphur’s first points came in the third quarter when Kayden Sedano scored on an 11-yard run with 4:39 remaining to cut the Barbe lead to 21-7.

The Tors gained excellent field position on the next drive off a bad snap on the punt gave them the ball on the Bucs’ 35-yard line. Trahan capped the drive with an 8-yard touchdown run with 11:39 to play in the game as they trailed 21-14.

After going scoreless in the third quarter, Barbe answered and put a cushion on the lead when Sanford threw a 25-yard touchdown pass to Reed Boyd with 9:28 to play. Sulphur answered when Trahan threw a 16-yard pass to Hopkins to cut the lead to 28-21.

Sulphur finished the game with 186 passing yards on the night and 159 rushing yards. Trahan finished the game by going 15 of 28 passing for 180 yards, threw two touchdowns, and rushed for another score. Sedano led the team on the ground with 74 yards rushing on 20 carries. Jonathan Hopkins finished with five receptions for 62 yards.

“When you’re down and things are tough and those guys were able to come back in the second half and everyone was on the same page,” Towery said. “I can’t say enough about these guys, about our coaching staff, this crowd, and the people of this town as it was an awesome night by our young men.”

Barbe finished with 182 rushing yards and 107 passing yards. Jones led the way on the ground with 162 yards on 22 carries.